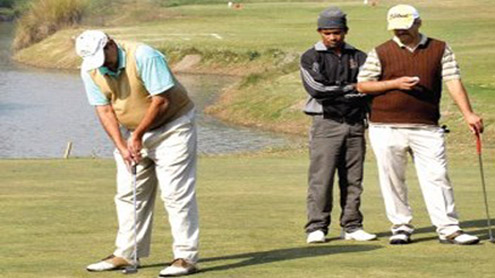 At the end of the first round of this three rounds 30th Millat Tractors Governors Cup Golf Tournament at the par 72 Lahore Gymkhana Golf Course,players like Rashid Akber(Lahore Garrison) and Dr.

Dildar Hussain(Gymkhana) applied their golfing expertise to perfection and this helped them to emerge  as the front runners in this prestigious  golf championship. Both these competitors  had similar scores of net 68 which represents an accomplished effort made possible through good drives ,crisp hitting off the fairways and no nerves during putting.Although these players have enjoyed good reputation as players of substance during friendly four ball games, important golf titles have not fallen into their lap,as occupational hazards of their business ventures have kept them away from important golf contests.

On this occasion however they have taken time off and decided to appear as the accomplished ones with golf titles up their sleeves.Sikandar Mustafa Khan of Millat Tractors was extremely pleased with the performances of these two players and praised the quality of their game. Out of the remaining 74 aspirants taking part in this prestigious competition,those who came safely through the first 18 holes are, Qasim Khan (Gym) with a score of net 69,Nauman Haider(Gym) with a score of net 70 and Mohsen Zafar (Royal Palm)with a similar score.Some more competitors who performed reasonably well are Ameer Khawaja net 71,Reza Said net 71,and three others at a score of net 72.

They are Saif Haider,Ali Anwar Khan,Khurshid Aziz and following them are M.Rehman,Fakhar Imam,Waleed Zubair,Omer Soofi,Anas Ahmed and Ahsen Zubair ,all bracketed at a score of net 73. For the defending champion ,Mohsen Zafar it was a wonderful day and though he is two strokes behind the leaders ,his battle hardened temperament is likely to give him an edge over the others during the remaining two rounds.

The  Convenor Golf,Agha Ali Imam  hoped that the leading contenders of the first day will continue the forthright approach and tackle the demands of this razor sharp competition like established champions. Ladies will enter the contest on Saturday and the prominent ones amongst them are Ghazala Yasmin,Asma Shami,Sameea Javed Ali,Maryama Khan,Ana James,Raheena Ihtesham and Nur e Zaman.