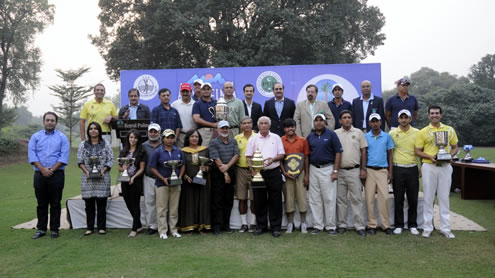 In the 7th Aquafina Royal Palm Golf Team Championship that concluded yesterday at the Royal Palm Golf Course,success was acheived by the Royal Palm ‘A’Team  through a steady effort which ultimately brought them victory and the Champion Team Title.For Royal Palm Team the big consolation has been that they remained as front runners at the end of day one,again at the end of day two,and even on the final day,although the runners up team,Gymkhana’A’made huge strides towards the victory  podium,the Royal Palm champions made them look just a bit less accomplished.All through the final day,Sardar Murad and Mohsen Zafar excelled again and seemed on similar path in terms of golfing scores,which brought forth winning fruits.

As for the two other team members,Abbas Ali Khan and Omer Salamat ,the effort lacked luster when compared to Murad and Zafar,however Abbas did manage to supplement what Royal Palm ultimately attained. The Gymkhana team consisting of Sameer Iftikhar,Imran Ahmed Aleem ur  Rehman and Waleed Zubair  ended the championship as the runners up through a rejuvenated effort on the second and third day of the championship.

On the fist day they were placed way down the ladder and this charged up players like Sameer and Aleem ur Rehman and the result is a far improved team performance in the overall reckoning.Defence Raya team of Fakhar Imam,Shafiq Bhatti,Col Shafi and Col Asif Mehdi came third. The team scores of top three teams were Royal Palm’A’698,Gymkhana’A’700 and Defence Raya 708. In the individual gross the gross winner was Aleem ur Rehman(Gymkhana) with scores of 78,75 and 70 and a total of 223.Ashiq Hussain(Multan)ended up as runners up,his scores being 73,74 and 76 and Tariq Mehmood(Pakistan Navy)was third with scores of 73,75 and 76.Net winner was Azfar Hassan(Royal Palm), Ali Anish Rehman(Guranwala)second and Fakhar Imam(Defence Raya)third.

The competition in PepsiCo Invitational was intense and through accomplished and adroit performances Javed A.Khan,Faisal Kari and Saeed Alvi were the gross winners.In the net Irfan Raja had the honor of coming first followed by Ahmed Rafi and Rehan ahmed. Ghazala Yasmin of Garrison Golf Club won the gross title for the third time running.Maryama Khan ended up as runners up and Tehmina Ahmed was third in gross.Winner in net was Abeeda Salam(Defence Raya),Zain un Nisa(Royal Palm)came second and Noore Zaman Khan(Gymkhana) ended up third in net.

At the conclusion of the 7th Aquafina Royal Palm Golf Team Championship,the prizes were awarded to the winners by Khurram Shah of Pepsico and Pervez Qureshi of Royal Palm in a grand ceremony attended by Ramzan Sheikh(Royal Palm and Super Cinema),Akber Naqi(Pakistan Navy) and a large number of golfers and families.