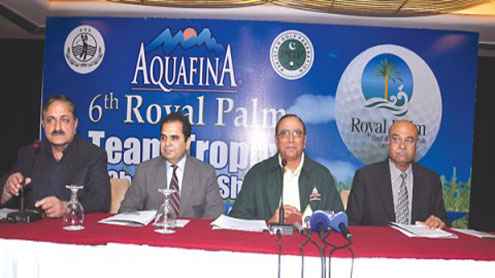 Team and the Royal Palm ‘A’Team were bunched together,as leaders, at a team aggregate score of 233 followed by Islamabad’A” at an aggregate score of 234, while the eleven  other teams participating in this contest were lagging behind.As a result these four  teams look much more formidable as compared to their other competitors and over the next two rounds the battle  for supremacy will be amongst these four only,unless teams like Karachi,Peshawar and Lahore Gymkhana can turn the tide through extraordinary performances. For Defence Raya team the main performers were Col M.Shafi(gross 76),Fakhar Imam(gross 77) and Shafiq Bhatti(gross 80).

The Multan team stars were Zulfiqar Ali(gross 72),Ashiq Hussain(gross 73) and Farhan Ahmed,a rather poor 88.For the Royal Palm team,Abbas Ali Khan carded a steady 77,Sardar  Murad managed a score of 78 and Mohsen  Zafar also scored a similar 78.The contest looks fearsome and the next two rounds are likely to produce a lot of thrills with quality golf,the order of the day. In the individual competition,the best one is Zulfiqar Ali of Multan who started the first round with a spectacular display of golfing excellence,scoring five birdies in a row on the front nine and when he completed his first nine holes,the word was out that we have a brilliant golfer on the course.And watched by many young ones he kept up his display untill he reached the 16th hole.

That is where everything went topsy turvy,as the focus seemed to have vanished and the shot making control was non existent.He finished the par-4,in eight and that eroded the excellence and he had be content with a score of 72 for the first eighteen holes.”I really dont know what struck me,but hope I can leave that behind and strive for dominance over the next two rounds”,said Zulfiqar. Other competitors in line for honors in Individual gross section are Ashiq Hussain(Multan) at a score of 73,Tariq Mehmood(Islamabad)73,Taimur Khan(Peshawar)75,Col Shafi (Defence Raya)76,Fakhar Imam (Defence Raya)77,Saleem Raza(Gujranwala)77 and Zohaib Wasif 7.