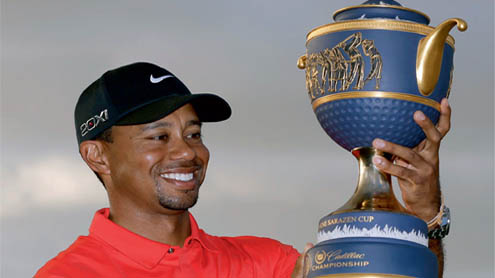 Tiger Woods captured the WGC-Cadillac Championship at the Blue Monster course Sunday with a closing round of one-under 71 for a two-shot victory over fellow American Steve Stricker.

Woods earned his 76th career PGA Tour win and posted his second victory of the year as he steps up his game ahead of the upcoming Masters tournament in April.Woods improved to 40-2 with the outright lead going into the final round on the PGA Tour, fending off a star-studded leaderboard on Sunday to finish at 19-under 269. The 14-time major championship winner Woods sank his final putt, picked up the ball and put it in his right pocket before waving his black cap to the crowd on No. 18.

“I played well this week,” said Woods, who collected $1.5 million in prize money. “It was one of those weeks where I felt good about the way I was playing and I made some putts. I pretty much got it rolling.” The 37-year-old Woods posted his 17th career WGC victory, though it was only his first in four years. He has not won a major title in almost five years but hopes to change that with a win in the 77th Masters running April 11-14. – KahleejNews