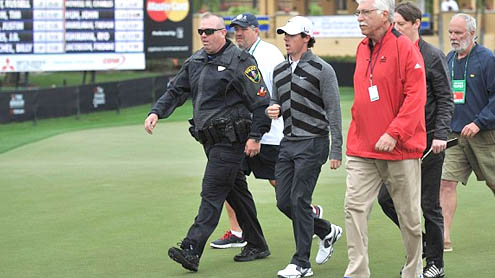 Rory McIlroy had barely made it back to his new home eight miles away at Palm Beach Gardens on that fateful Friday last week when he knew he had done the wrong thing.

As Jack Nicklaus so wisely opined, if only he had thought for five minutes, he wouldn’t have done it.In an interview with American magazine Sports Illustrated last night, McIlroy held up his hand and admitted it was a terrible mistake to walk off the course after eight completed holes of his second round at the Honda Classic.Whatever has been said in the aftermath during the storm that has become McIl-gate, ‘I have probably said to myself,’ he commented.

‘It was the wrong thing to do,’ added McIlroy, and with those seven words he did what he’s always done on the few occasions he has made mistakes, and taken full responsibility for his actions.’It was a reactive decision. What I should have done is take my drop, chip it on, try to make a five and play my hardest on the back nine, even if I shot 85,’ he said.

‘What I did was not good for the tournament, and not good for the kids and fans who were watching me.’ McIlroy said at the time he was ‘not in a good place mentally,’ and then a statement was issued on his behalf an hour later blaming a sore wisdom tooth.The latter is an ongoing problem – his Belfast dentist Mark Conroy has faxed a letter to the PGA Tour describing the problem – but McIlroy admitted it can be treated with painkillers and did not constitute the sort of injury that would be a mitigating reason for walking in.

This, after all, is the man who played on with a badly strained tendon in his wrist after damaging it while playing from off a tree root at the 2011 USPGA Championship.McIlroy will learn from this, like he always does. He will learn that it is always best to come clean, and not seek to pull the wool over people’s eyes. Here’s betting he never walks off a course again.Now it’s time to work on those damn swing issues that are far more infuriating than a bad tooth.

McIlroy admitted to suffering teething problems since his switch from Nike. ‘The driver and the ball took some time to get used to, but I had weeks at Nike before the start of the year, and I feel comfortable with all the equipment,’ he said. ‘The problem is, I’m bringing the club too upright on the backswing then dropping it in too much on the downswing.’The next time he will be seen in public is tomorrow at Doral and the WGC-Cadillac Championship. – DailyMail