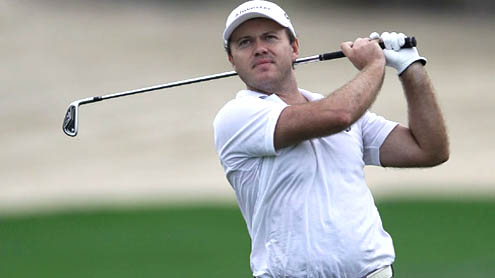 South Africa’s Richard Sterne maintained his one-shot lead at the Omega Dubai Desert Classic here on Friday as the chasing pack ominously bunched up behind him.

The Pretoria-born 31-year-old’s four birdies and two bogeys stretched his overnight 10-under par out to 12 by the close of play on day two at Emirates Golf Club.However, with 18 other golfers within four shots of his precarious lead and the likes of Tommy Fleetwood, Stephen Gallacher and Thorbjorn Olesen in close proximity, Sterne is only too aware that the race for outright supremacy is heating up.

“I’m pretty happy with the performance today,” he said. “It was not as easy as Thursday. Things didn’t go as easy, but I’m quite happy.“I held it together and I made a couple of good putts at the right time and a couple of good shots. It was pretty consistent.“It’s going to be quite tricky coming to the weekend. There are a lot of guys bunched up and you’re going to have to play pretty well on the weekend to be there on Sunday.“There’s a long way to go in this tournament. The guys are bunched up and there are some good players and anyone five or six back has still got a good chance of winning.

“Normally somewhere around 18 or 20 under has always got a chance if you look at the history of this tournament, so I would expect something like that. It depends on the wind as well, but somebody will be close to that.”Olesen is one contender looking likely to challenge, with 11 birdies and no bogeys to his name over 36 holes thus far.“I’ve rolled the putts really nicely for the first two days and that’s why I’m 11 under,” the talented Dane, 23, said.

“The key to Thursday and today was the putting. I rolled the putter really nicely out there and holed some really good putts.“I started with four birdies and that made it a little bit easier. It’s definitely down to the putting and the irons were also really nice. I struck them really solidly. I played a lot better.“It’s been three great tournaments for me. Hopefully, I can finish this one off.“I’m hungry for more wins. I want to win twice this season. That’s my main goal, so the quicker I can get the first one, the better.” – KahleejNews