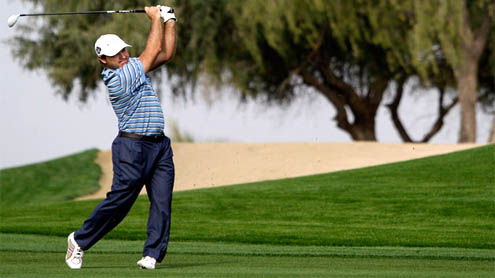 Richard Sterne stormed to the top of the leaderboard with a tremendous 10-under par 62 on day one of the Omega Dubai Desert Classic on Thursday.

The 31-year-old South African registered six birdies across the back nine and four along the front for a bogey-free, faultless opening round that was just one stroke shy of Ernie Els’ 19-year course record.Scotland’s Stephen Gallacher ended these initial 18 holes a shot behind Sterne in second place, while England’s Tommy Fleetwood and Gallacher’s compatriots Chris Doak and Scott Jamieson finished up tied for third position and two further back.

“I had good chances for eagles there on the back nine and birdied 16, 17 and 18, which was nice,” Sterne said.“Then, on the front nine, I birdied two, four, six and seven. The rest were all pars, so it was pretty consistent. It could have been quite special I suppose, but I’m quite happy with what happened. It’s as good a start as I could have hoped for.”Sterne’s posting of such an impressive score early on should stand him in good stead as he bids to challenge for the $416,660 winner’s cheque down the stretch on Sunday,

However, with more low numbers looking likely in these conditions, he knows only too well he must build on that encouraging momentum heading into the weekend.“It looks like the scoring is pretty low,” he explained. “The course is playing a little bit easier and the rough is not as up as it normally is.“Looking at the leaderboard, there are a lot of guys from four or five-under par onwards, so it’s going to be quite a low-scoring event.“Normally, 17 or 18 wins it around here and I would imagine maybe somewhere around 21 would do so this year.

“It might be just a little bit more bunched than the previous years, so you’ve just got to keep going.“These guys keep going lower and lower every day, so if it happens, it happens.“I’ll just try and put three more solid rounds together and hopefully — come Sunday — that’s enough.“It’s day one. If I’m leading after day three, then I suppose it’s a different story and I’ve got a realistic opportunity of winning the tournament. If it was after day one that they awarded the trophy, then I would be happy, but — unfortunately — that doesn’t happen.”

The fiction of history

The fiction of history