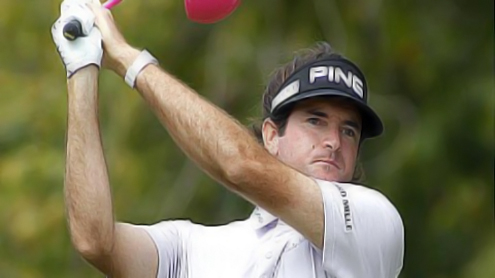 BANGKOK: Masters Tournament champion Bubba Watson wants to end his banner season on a high by winning the US$1 million Thailand Golf Championship which starts on Thursday.

The swashbuckling American lefthander arrived for the Asian Tour showpiece at Amata Spring Country Club in confident mood, declaring that he did not fly to Thailand to soak in the accolades after winning his first career Major in April.”I’m here to win. That’s everybody’s goal. I’m not here to wave at everybody,” said the world number 12. Watson will line up in the second edition of the Thailand Golf Championship alongside many giants of the game including title holder Lee Westwood, 2011 Masters winner Charl Schwartzel, Ryder Cup stars Sergio Garcia and Nicholas Colsaerts, 2011 British Open champion Darren Clarke, Ryo Ishikawa, PGA Tour winner Hunter Mahan and eight of the top-10 players from the Asian Tour’s Order of Merit led by number one Thaworn Wiratchant.

After arriving in Bangkok on Tuesday morning, Watson found out that the mantle as the reigning Masters champion did not bring him instant recognition when he attempted to play the Royal Sports Club course, which is a private course located next to the official hotel.”I flew in here and felt tired. I just wanted to get some energy levels up. I didn’t know how private it (the club) was and it took some hard work to get in there!” said Watson. “I played about 10 holes. I just had a seven iron in hand.” Watson will have with a bagful of new equipment which he will put in play at the magnificent Amata Spring and into the 2013 PGA Tour season which starts in several weeks.

“Pretty much everything is brand new since China and I’m trying to get ready for next year. I worked on it last week (Chevron World Challenge) and finished ninth, and it’s feeling better. I missed some putts and hit some bad shots last week but I’m looking forward to the momentum of this week and trying to play some good golf,” he said. Watson defeated South African Louis Oosthuizen, who withdrew from the Thailand Golf Championship due to a stomach ailment, in a play-off to win the Masters Tournament. He produced a remarkable recovery shot from deep in the woods to save par and win the green jacket.
“If you look back, all golfers want to win. Their first goal is to win a golf tournament that year. For me, I’ve won a tournament in the last three years and to win a Major is a bonus. It’s a dream come true. You expect to win one but to actually do it, it’s actually very emotional and after doing it, I obviously cried a lot,” he said. – PT