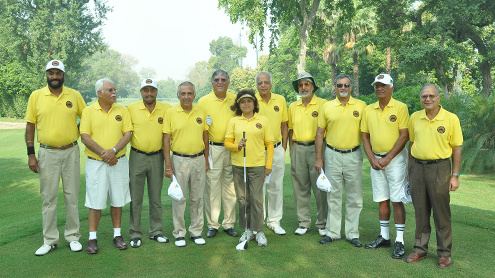 In this three days golf competition between a fourteen member golf team from Delhi Golf Club and a fourteen member home team assembled under the umbrella of “Together We Golf”, the first round came to an end at the Royal Palm Golf Course yesterday and the Indian Golfers who had the disadvantage of playing at a golf arena new to them, sprang a surprise by winning four team matches as against three won by the hosts and in the process gained a one point advantage over the Together We Golf Team.

The first round was contested on scrambles match play basis and the teams were divided into seven pairs who really fought it out against each other,in a rather accomplished manner, playing quality golf without being overwhelmed by each others strengths. Hitting from the tees carried that essential touch of accuracy and it was a lesson to see the Indian Seniors really hold their nerves,even at crucial stages during the round,using their yoga lessons to extremely good effect, and produce chips and putts that looked extraordinary.This aspect did tilt the result their way,and cast a momentary spell of distress amongst their opponents. The total  points at stake on the first day were seven and the overall score position was 4-3 in India’s favour.

For the visiting team the victorious combinations were R.S.Bedi and Ini Bawa,Maj Gen(r)KMS Shergill and Prakash Bhandara,Anil Virmani and Bubbles Suneja and the fourth India pair that achieved victory was Man Mohan Singh and Vijay Dhawan. From the Pakistani side the hot pairings turned out to be the combinations of Sardar Murad Khan and Maqbool Babri, Asad Sheikh and Moeen Salahuddin and the third victorious pair was Asad I.A.Khan and M. Ramzan Sheikh.

For the second round of the contest the teams move to Lahore Gymkhana Golf Course with tee off scheduled for 9.30am, on Saturday.