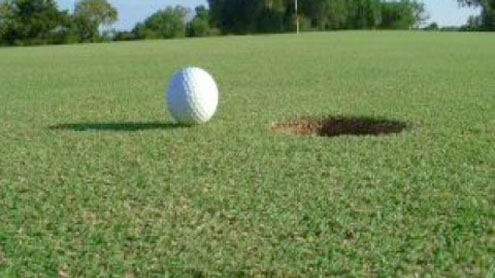 In this three rounds 2nd Sayid Paper Open Golf championship being contested at the grand par 72,Defence Raya Golf Course in Lahore,Matloob Ahmed(U Fone) and M.Asif of Defence Raya Golf Club jointly continue to clasp the top of the leaderboard position,at the end of the second round with matching two rounds aggregate score of gross 143,one under par.

Playing the second round in the same flite alongwith Shafiq Masih(Honda) these three displayed real contesting golf and though for a while Matloob moved ahead on the back nine through a birdie on the 12th hole,he lost the advantage through poor putting on three consecutive holes,the 13th,14th and 15th which he three putted.Matloob managed to demonstrate his retrieval powers on the 16th hole where his fluent hitting fetched him a superb birdie,but surprisingly the masterly touch did not last long and a slightly less efficient chip on the 18th resulted inanother bogie leaving Matloob fairly distraught.

Asif however was the cheerful one as Matloobs play on the closing hole of the 2nd round gave him a chance to remain a leader alongwith Matloob.On the second day Matloob had a round of par 72,comprising of five birdies,five neutralising bogies and eight pars.As for Asif,he carded a round of 72 wih three birdies,three bogiesand twelve pars.However the battle is on and the final day promises fireworks.

The young star Shafiq Masih did not improve on his first days score and the stroke losses,in the second round yesterday  were just too frequent and the tilt between bogies and birdies not tilting in his favour.Two birdies,three bogies and thirteen pars gave him an 18 holes score of 73 and an aggregate score of 145,two strokes behind the leaders.An energetic player that he is,he promises a great round on the final day today.”I am getting ready for the MENA golf tour in Dubai”,he says and “I want a memorable performance here to boost my confidence for the five matches in MENA Tour,UAE”.

Also lying at 145 is Zulfiqar Ali of DHA with two rounds scores of 75 and 70.Out of the other top contenders Shahid Javed Khan of Royal Palm showed tremendous ability and as compared to his first round score of a rather modest 78,he carded an excellence loaded score of 69,three under par yesterday.This also represented the best score of the second round and as result Shahid has climbed many position up and lies fourth on the leaderboard with a two days aggregate of 147.And he is likely to pose a threat to the top three on the final day.

Amongst the amateurs Faisal Sayid played an amazing round on Wednesday and as result leads in the amateur section.Talat Ijaz continues to play a superb role as the Organiser of the Championship.The finals will be played today and at the conclusion of the Sayid Paper Open Golf Championship,Faisal Sayid will award prizes to the winners.