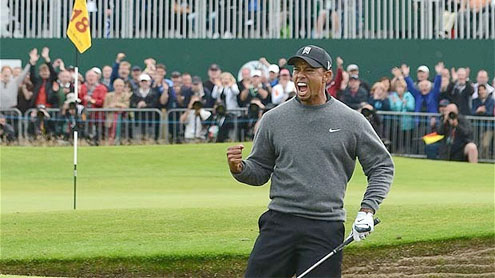 Typical of Tiger Woods to steal the headlines off a history-maker. He holed a bunker shot on the 18th yesterday evening to set up this weekend perfectly.

A 15th major is tantalisingly in focus, as well as the world No1 berth. But as the Fylde Coast resounded with uproar, it was wise to keep in mind that Woods was still four off the pace held by Brandt Snedeker. The lesser-known American’s performance here these first two days genuinely deserved better than to take second billing – even it was behind a classic Tiger moment. Not since Nick Faldo stamped all over Muirfield’s hallowed reputation in 1992 has the Open seen anything like it. Snedeker matched the Englishman’s halfway record of 130 strokes with a display as faultless as it was unexpected.

Miss three Open cuts, become the first player in 12 years to remain bogeyless through the first two rounds. This is not a normal links major and Snedeker is not the normal leader of a links major. The 31-year-old’s 10-under magnificence is the stuff of dreams and to the custodians of Britain’s traditional courses, probably the stuff of nightmares also.But for the resilience of Adam Scott, Snedeker would have left the field standing. Scott, the first-round leader, closed within one shot courtesy of a 67 featuring four birdies and one bogey. It sounded as close to perfection as was feasible until put alongside the heroics of the blond-bombsheller from Nashville.

But then came Woods with his re-run of the wonder of yore. The former world No 1 was very satisfied with his second successive 67 and at five-under he remains the favourite to win a 15th major. It was not an easy bunker shot – there’s no such thing at Royal Lytham – but he flipped it up on to the green and holed it anyway. The punch of the first said it all.

“I’m pleased with where I’m at – right there in the mix,” said Woods, who redeemed himself after his expletive at the 11th following a wayward shot. “I had a gameplan I thought would fit well and I’ve executed it.” Woods’s tactics have been cautious, favouring irons off the tee, even on the two reachable par-fives. It is not exciting, but it is effective and if the Met Office is correct about the taxing conditions coming Royal Lytham’s way, he – and everyone else – will fancy his chances.

Yet he also acknowledged that if Snedeker’s aggression continued to be rewarded and if his putts kept dropping, he would be untouchable. “What Sneds has done here is very impressive considering where the pins have been,” Woods said. “A lot of them were on knobs and they were just really tough putts.”

Not only has Snedeker kept bogey off his cards – emulating Woods at the 2000 Open at St Andrews – but he has yet to visit a bunker. Indeed, these two blanks are so obviously connected. There are 206 bunkers at Royal Lytham, it is like traipsing down Coronation Street without stepping on a cobble. Rather humbly, Snedeker put his sandless endeavours down to the conditions and good fortune. “This is hardly the usual weather we have at links – it’s normally windy,” he said, partly explaining his hat-trick of early exits at previous Opens. “The golf course has been Americanised, with the softness caused by all the rain. I’ve never seen balls spin back on Open greens.

“And to hit no bunkers here, you have to get lucky. I’ve got fortunate with bad shots that haven’t gone in the bunkers or found particularly bad rough. I don’t expect that stat to hold over the weekend.” It will verge on the miraculous if it does, especially as gusts of up 30mph are forecast for tomorrow’s finale. Yes, it has been benign here these opening two days but the scoreboard reflects that it has not been as straightforward as the displays of the two runaway pacesetters suggests.

The wind had switched direction yesterday, making the first six holes so demanding. Snedeker played them in two-under. He then reeled off four more birdies, on the seventh, ninth, 11th and 12th. The three-time winner on the PGA Tour is credited with being a fine putter and also a fast player. In these days of five-hour plus rounds, his no-nonsense approach is a refreshing sight.“He plays quickly, he putts well and the ball goes in the hole quickly,” was how the veteran Mark Calcavecchia summed up his friend. Snedeker is one of the few modern players who drinks and has been sampling “the local ales” this week. He deserved a few last night. Whatever he says, this is still links golf and he has clearly learned to accept its vagaries.

The oldest form of the game is prone to throw up challenges and so it has here with waterlogged bunkers. The Royal & Ancient explained that they were drained before play began, but that some of the bunkers happen to be so low they are below a water-table swollen by Thursday’s deluges.So they filled back up and soon the galleries were watching players picking up balls from puddles and re-dropping in the bunkers. A few such as Keegan Bradley decided they were better off donning waterproofs and splashing out from the pool; otherwise they would have to take a penalty and drop out of the bunker.It would be such a shame if there is more rain and this becomes commonplace in the conclusion.

The rains could not dampen the spectacle, however. Denmark’s Thorbjorn Olesen is well tucked in at five under after a second-round 66, while Paul Lawrie and Graeme McDowell carry British hopes on four-under and Luke Donald’s 68 took him into the red at two-under. A 75 for Rory McIlroy saw him drop back to two-over and all but out of it, while Lee Westwood was one further back.Some big names have headed home, including Phil Mickelson – simply awful in a 78 for an 11-over catastrophe – and the defending champion, Darren Clarke. But remarkably, Tom Watson is remaining on the premises after a 15-footer for birdie on the 18th meant he made the cut by a shot. At 62, he has still got so much fight. Do not be surprised if Royal Lytham proves likewise this weekend. – Thetelegraph