The Open 2012: Adam Scott takes early lead as major rivals Tiger Woods and Rory McIlroy line up behind him 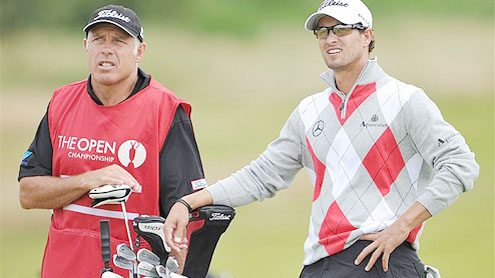 What the first day of the 141st Open Championship lacked in wind it more than made up for in major-winners.

If Adam Scott dared to look over his shoulder on Thursday night he would have seen so many champions lining up with intent.  Nobody loomed more ominously than Tiger Woods. The former world No 1, who would return to the berth he made his own with victory on Sunday, survived one trip to the undergrowth to post a three-under 67. That left him in a tie for sixth, three behind the Australian pacesetter, who was one ahead of a group including Scotland’s Paul Lawrie.Rory McIlroy is on the same mark as Woods, despite a bizarre piece of misfortune which featured him ricocheting off a young fan’s head out of bounds. Even when it is this benign, Lytham produces mad moments.

Of course, the old links lying half a mile off the Fylde Coast has long had a propensity for favouring the game’s best. The likes of Ernie Els, Graeme McDowell and Bubba Watson are in the top 10, as are four other major-winners. If and when the gusts arrive they are likely to sort the major-men out from the virgins.Surely the weather gods will not so kind again this week. Scott’s 64 is the lowest first round in the first round of an Open at Lytham, and tied Tom Lehman’s low mark in any round here in eight previous Opens. The man who employs Steve Williams, Woods’s brusque ex-caddy, actually had an opportunity to achieve a feat yet more notable.

Having wielded his wretched but effective long putter with devastating effect, Scott needed his ninth birdie in 15 holes – having been over after three – to record the first 62 in 151 years of the majors. Instead he bogeyed, after a snipe into the thick rough and so the magic number remains unattained. Scott was hardly bemoaning his morning’s work, however. “I know there’s never been a 62 and when I was waiting to use the bathroom going to the 17th tee I did a look at the leaderboard and realised it was a par-70,” said Scott. “It was surprising but pleasing to play some solid golf as I haven’t done that in the majors this year. That was my goal here.”

He was urged on in this respect by Williams, who had seen him come back to finish eighth at The Masters and 15th in the US Open this year, after firing opening rounds of 75 and 76 respectively. “He wanted me to go to that first tee today like it was the 72nd hole and you have three to win.Really to switch myself on,” said Scott. “That was a good little trigger he helped out with.”Whatever anyone feels about the Kiwi bagman no-one can suggest he lacks confidence. He proved this with all but crediting himself with Scott’s World Golf Championship win in Akron last year following his acrimonious parting with Woods.

How Williams would love to deny Woods his first major win in four years, although, don’t tell him, but it would be Scott doing the denying. His chance of becoming the 16th different major-winner in succession should not be discounted. In 2008, Scott rose to world No 3. Unfathonly, he then proceeded to fall out of the top 50. Back up to 13th in the rankings, Scott has everything it takes to fend off the quality in pursuit.

One behind stand the trio of Zach Johnson, the 2007 Masters champion, Nicolas Colsaerts, the big-hitting Belgian, and most notably Paul Lawrie, the last Briton to win a major at the 1999 Open in Carnoustie. Lawrie chipped in twice and holed a putt off the green in the first six holes. At that stage the 43-year-old was three-under and flabbergasted. “It was the most bizarre six holes of my career,” he said. “I should could have been one-over.”

Lawrie, who is so close to qualifying for a second Ryder Cup after a resurgent campaign, capitalised on his good fortune, with further birdies on the 14th, 15th and 18th. So much for Lawrie being a bad-weather player.“I have won when it’s been rough so I can understand why people think that,” said Lawrie, who so famously beat Jean Van de Velde with a brilliant 67 in the wilds of Carnoustie. “And if it gets windy that won’t worry me.” At some stage Mother Nature will blow and Woods will be forced to pull out his driver more than twice in the fashion of this 67. It took him only seven holes to take the lead, with four birdies. But the putts stayed above ground on the back nine and on the 15th, he bogeyed.

In truth, it was a good five after hacking out of the thick rough into more thick rough and barely being able to see his ball. Woods’s strength allowed him to find the green and the damage was limited. There will have to plenty more of that these next three days.McIlroy will be praying there will be no repeat of the dreadful luck which marred his afternoon. The drive on the 15th was wide without looking disastrous until it struck the poor 16-year-old on the head. Jason Blue must have a hard cranium as it deflected the ball out of bounds. It landed in the area made famous by Seve Ballesteros car-park shot in 1979.

After ensuring the lad wasn’t too badly hurt – thankfully he was soon up and posing for pictures – Mcilroy was stunned to be told it was OB. He returned to the tee-box and after the double-bogey took out of the frustration of conceding two shots by driving the 16th green. McIlroy also birdied the last to ignite the excitement. Could golf finally see the Tiger and Rory showdown which it has been craving?

So many major-winners will think otherwise. McDowell, who finished as runner-up in the US Open, is in tremendous nick and has the wherewithal to cope with whatever weather comes Lytham’s way. Els, meanwhile, clearly senses he is ready to reprise his Claret Jug heroics.And the English challenge? Luke Donald, the world No 1, looked like breaking 70 in the first round of major for the first time in six years.But he bogeyed the last and lies six behind. That’s three better than Lee Westwood, the world No3 who was so widely tipped beforehand.Westwood started with two birdies but from there, by his consistent standards, was woeful in his 73, spraying the ball left and right. It was the day to make hay, not land in hay. – Telegraph