Woods, at His Best, Matches One of the Greats 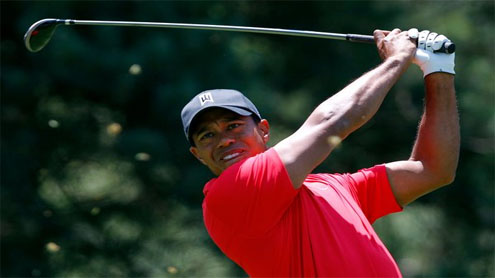 Woods at His Best Matches One of the Greats

DUBLIN, Ohio: There are “safe house” signs scattered around Muirfield Village Golf Club, residences of refuge for the golfers during weather delays.

The course built by Jack Nicklaus, the Memorial Tournament host, has long been a shelter for Tiger Woods. Woods, a four-time champion, came to this year’s event forecasting ample sunshine. Gone, he insisted, were the clouds that had darkened his game at the Masters, where he failed to contend and finished tied for 40th, and the ill winds at the Players Championship, where he had to grind to make the cut.

After ending a more than two-year victory drought at Arnold Palmer’s tournament in March, Woods on Sunday basked in the warmth of another trophy presentation. With a five-under-par 67, Woods finished at nine-under 279, two strokes better than Rory Sabbatini (72) and Andrés Romero (67). It was Woods’s 73rd PGA Tour victory, tying him with Nicklaus, behind only Sam Snead’s 82.At 36, Woods is 10 years younger than Nicklaus was when he won his 73rd, at the 1986 Masters.

“A nice run since I turned pro,” said Woods, who equaled the low round of the day. “To do it at age 36 is not too shabby.”As he did with numbing regularity through 2008 and into 2009, Woods performed his best on a Sunday when the pressure was at its greatest. After making five birdies on the four par-5 holes in the first three rounds, he played them in three under Sunday.Woods had played the three grueling finishing holes in two over par the first three days. In the final round, Woods negotiated them in two under, starting with a holed chip from thick rough for a birdie 2 at No. 16. When he greeted Woods after he finished, Nicklaus told him the shot was “the best I’ve seen here.”

Who was Woods to argue? With water on the left side of the green, his margin of error was whisker thin.“It was a tough shot, there’s no doubt,” he said, “because if I leave it short, it’s going to roll down left, and if I hit it long, it’s in the water.”Woods started the final round four shots behind Spencer Levin, a nonwinner on the tour. The Memorial was Levin’s 115th tour start since he turned professional in 2005. Levin’s father, Don, played on the tour for three years but was off the circuit by the time Levin was born in June 1984. According to Levin, his father was not the player who sparked his interest in golf.

“The reason I started playing,” he said, “was I was watching Tiger as a kid winning all those tournaments.”Levin headed to the 10th tee with a three-stroke lead over Woods. On the first four holes of the back nine, he lost his inner homing device and his lead, going bogey, par, bogey, double bogey. He closed with a 75, finishing tied for fourth with Daniel Summerhays, who carded a 69.“I’ve just got to find a way to get a little tougher there on the back nine,” Levin said. “That’s it. I’ve just got to find a way to trust myself a little more. The mind starts wandering, and it’s easy to do.”

At least Levin can say he had a better day than Rickie Fowler. With top-10 finishes in his last four starts, including his first tour victory, Fowler was on the best roll of any of the contenders, and he applied heat on Levin with a birdie on the first hole.Fowler’s climb up the leader board ended with an unsightly stumble. He played the second, third and fourth holes in four over. At No. 3, a 405-yard par 4, Fowler hit his approach into a greenside bunker. After blasting out to 11 feet, he three-putted for a double bogey from which he never seemed to recover.

Fowler, who was paired with Woods, did not post his first par until the seventh, a par 5 that he had birdied two of the previous three days. He made the turn in 40 on his way to an 84, which dropped him into a tie for 52nd.“One of those days,” Fowler said, adding, “Going to get a lot of Sundays from now on, some good ones and some bad ones, and this is not going to be the last bad one.”Fowler, 23, is an occasional practice partner of Woods’s in Jupiter, Fla. What he saw Sunday, Fowler said, was vintage Woods.

“Yeah, I mean, he was very in control of his game today,” he said, adding, “He was hitting some solid golf shots, and it was fun to see him finally out there making some swings like he does when we’re at home.”Woods’s previous win here was in 2009, when he made up a four-stroke deficit to beat Jim Furyk for his first title since he returned, with a reconstructed swing, from an eight-month injury layoff. In 2001, Woods won his third consecutive Memorial crown, playing the par 5s in 14 under despite Nicklaus’s best efforts to Tigerproof the course by making the longest holes harder.

After summoning some of his old magic, Woods said he was “excited” for his next start, in the United States Open at Olympic Club in San Francisco. Woods, a 14-time major champion, might have caught Nicklaus on Sunday, but he is still chasing his record 18 major titles. That pursuit, which appeared stalled, just picked up in intensity. – NYtimes