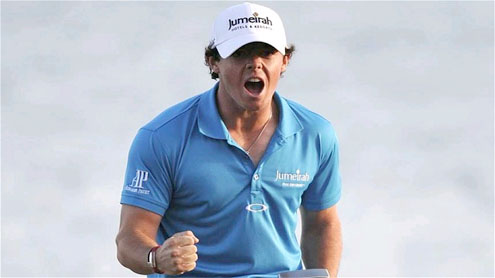 Rory McIlroy propelled himself to the golfing summit last night with a display befitting the No 1 player in the sport.

Sinking a series of pressure putts exactly when he needed to, the Ulsterman won the Honda Classic with a 69 to claim the top spot for the first time in his extraordinary career. How poetic that he should have done so on the day that Tiger Woods, the man who made the world No 1 ranking his own, surged back into the headlines with a fabulous final-round 62.

“Enjoy the view,” Luke Donald, the man whom McIlroy deposed in south Florida, told his successor. You expect the 22 year-old will do precisely that. On an afternoon of convulsive drama, Woods put some vivid colour back into his Sunday red shirt with a birdie-eagle finish to detonate roars all around the PGA National course at Palm Beach Gardens.

And yet McIlroy retained his composure quite brilliantly. He sank an eight-foot birdie putt, before making three critical par saves during the course’s most arduous stretch. Sensibly, he took the conservative approach at the 18th, making a fourth straight par for a round in the 60s, and ensuring that he would usurp Donald when the revised rankings are published this morning. It was a round of consummate maturity.

“It was tough, especially seeing Tiger make a charge,” McIlroy said. “I knew par golf would probably be good enough. To shoot one under in these conditions, when you go into the round with the lead, is very nice. I was just able to get the job done.”

McIlroy becomes the 16th golfer to assume the mantle of world No 1, and the second youngest after Woods, who was 21 when he first attained supremacy after the 1997 US Open. Woods made two eagles in the final round to finish two shots behind, alongside fellow American Tom Gillis. It was McIlroy’s fifth victory as a professional, and one that came close to matching even his record-setting US Open triumph at Congressional in terms of sheer satisfaction. For he has unlocked not simply a winning mentality, but the virtue most vital to staying at No 1: consistency. The fact was easily overlooked amid the emotion last night, but he has finished out of the top five only once since the PGA Championship last August.

“There are very few players as good at him at his age out there winning tournaments,” three-time major champion Padraig Harrington said. “There are guys with potential, but he’s already delivered. And he has a good balance in his life. He doesn’t look like a guy who is going to burn out. He looks like he’s going to be here for a while.”McIlroy shared a warm embrace with father Gerry as he walked off the 18th green. His parents have flown over from Belfast to stay with him in south Florida until the Masters, where McIlroy should already be established as favourite. But in the wake of a Sunday such as this, no one will be hasty to discount Woods either.

He was nine shots behind going into the final round, and even a 31 on the front nine in windy conditions left him five shots adrift of McIlroy. But the denouement – in particular, a sumptuous five-iron into the 18th green – was classic Woods, and it at least gave him a glimpse of a winning opportunity.“To me, it was the old Tiger back, the guy that I remember,” said Ernie Els, his playing partner. “He never missed a shot or made a bad swing.” Lee Westwood, playing two groups ahead of Woods, closed with a 63 to finish alone in fourth.

McIlroy was not at his most consistent on the front nine, although he channelled his recent habit of turning a scratchy round into a fine score. Despite having only two reasonable birdie chances on the front nine, McIlroy saved himself with two straight par putts from 12 feet and another one from eight. No one looked capable of catching him, at least not until Woods’ late salvo.

Woods was still five shots behind until a finish that served as a reminder why he could never be dismissed as a threat. “I figured I had to go birdie-birdie to have a chance,” Woods said. As it transpired, he went one better. First, he drained a 25-footer for birdie at the 17th hole, before a booming drive on the last left him a five-iron into the signature water-guarded green. The pin was tucked to close to the edge of the lake, but the ball cleared the sand to settle a mere eight feet away. As the putt dropped for eagle, Woods swept his fist to spark the electricity of old.

McIlroy, though, would not be denied. There was scant margin for error, at the 13th, he found himself in deep rough, he still gouged a wedge out to four feet from the cup for par. His decisive act came on the 17th, as he made par once more. Altogether he had seven ‘one-putt’ greens: the mark of a world No 1, if ever there was one. – Thetelegraph