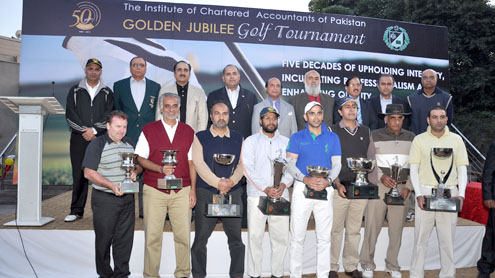 The 1st ICAP Golf Tournament conducted by the Institute of Chartered Accountants of Pakistan concluded at the par 72,Royal

Palm Golf Course yesterday,after 18 holes of competitive golf and though the contenders for top prizes were as many as 119,the ultimate winner in gross section turned out to be Sameer Iftikhar,a three handicapper.

who emerged with the best gross score of the day,a four over par 76 and thereby picked up the winners trophy from Sardar Latif Khosa,Governor Punjab.During this prestigious corporate event,Sameer’s nearest challenger was Omer Salamat,who ended the 18 holes fight with a score similar to that of Sameer but Sameer won because of a better score on the back nine leaving Salamat a little distraught as he had to be content with the runners up prize.In this category Sardar Murad came third.In the handicap category 1-12,the winners in net category were Abdullah Sharif,first with a score of net 69,Faisal Ali Malik,second with a net 70 and Nasir Irshad,third with a net 72.

On the occasion of the prize giving ceremony,a lucky draw was held for the caddies also and 10 lucky ones were given bicycles by the Governor Punjab,Sardar Latif Khosa and Rashid Rehman Mir,President ICAP and Haji M. Yousaf of ICAP.Haji Yousaf stated that this golf tournament was an initiative on the part of ICAP to promote corporate golf.Also present at the concluding ceremony were Ramzan Sheikh,Lt Gen(r)Muhammed Tariq,Naeem Sheikh,Pervez Qureshi,Ronda Ehsan of CIDA,Col(r)Jamil Khalid,Zia ur Rehman and a large number of participating golfers.