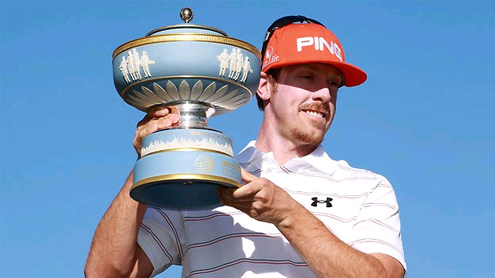 MARANA, Arizona: American Hunter Mahan ended Rory McIlroy’s bid to become world number one for the first time with a 2&1 victory over the Northern Irishman in Sunday’s final of the WGC-Accenture Match Play Championship.

With McIlroy initially failing to replicate the stunning form he produced earlier in the day on the way to a 3&1 semi-final win over third-ranked Briton Lee Westwood, Mahan took advantage with a seven-birdie display.The 29-year-old never trailed after going ahead at the par-three sixth, and he fended off a McIlroy fightback after the turn, ending the match with a comfortable two-putt par on the 17th green.

“I didn’t realize how difficult it is to win this week because it’s six matches and you’re playing against the best players in the world,” said Mahan, who defeated fellow American Mark Wilson 2-1 in their semi-final.

“I played well from tee to green, putting to chipping to driving, irons, everything was there. And I needed everything to win. I’m very proud of how I played,” added Mahan who totalled 35 birdies during the week from 96 holes.

World number two McIlroy, like Mahan appearing in his first Match Play final, would have replaced Britain’s Luke Donald as the game’s leading player when the rankings are issued on Monday had he claimed his first WGC crown.

“Deep down I wanted to postpone that crowning of the No. 1 player in the world for Rory,” Mahan said with a grin. “But he’ll be No. 1 eventually. I’m not worried about it, I’m sure he’s not.”

US Open champion McIlroy applauded Mahan’s performance, but conceded that his hugely anticipated morning semi-final against Westwood had sapped some of his energy.

“Maybe mentally and emotionally it did take a little bit out of me but it still doesn’t take away from the fact that Hunter played very, very solid golf,” the 22-year-old said.

“Even though I threw a few birdies and an eagle at him on the back nine, he still responded well and held on. During the course of the week, he played the best golf and deserved to win.”

In dazzling afternoon sunshine at Dove Mountain, both players bogeyed the opening hole, Mahan after duffing a chip from behind the green and McIlroy when he lipped out from four feet.The next two holes were halved with matching birdies and McIlroy was fortunate not to go one down at the par-four fourth where he had to take a penalty drop after his tee shot ended up in desert scrub.He bogeyed the hole, as did Mahan who struck his approach into the front left greenside bunker after being perfectly placed off the tee.Mahan finally broke the deadlock to go one up with a conceded birdie at the sixth where he struck an exquisite tee shot that settled within two feet of the cup.The American then benefited from a poor matchplay decision by McIlroy at the par-four seventh.After watching Mahan’s approach from 135 yards pitch on and then spin back down the hill below the green, McIlroy followed suit and then failed to reach the green with his chip.

While Mahan bogeyed the hole, he went two up after the Northern Irishman missed a 10-footer to double-bogey.McIlroy was again in trouble at the par-five eighth, finding a bunker off the tee, failing to reach the green in three and then lipping out with an eight-foot par putt to go three down.Mahan went four up after nearly holing out from the fairway with a 180-yard approach at the par-four 10th, his ball finishing two feet past the cup for a conceded birdie.Though McIlroy chipped in to eagle the par-five 11th and also birdied the par-four 14th to trim Mahan’s lead to two-up, the American held him off over the next three holes.In the consolation match, American Mark Wilson beat Westwood one-up to secure third place. – Arabnews