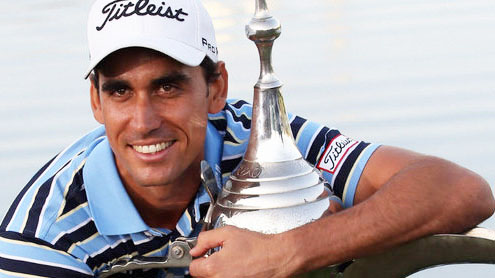 DUBAI: Rafael Cabrera-Bello held his nerve against a star-studded field Sunday to win the Dubai Desert Classic, shooting a 4-under 68 to beat Lee Westwood and Stephen Gallacher by one shot for only his second European Tour victory.

It appeared to be Westwood’s tournament to win as the third-ranked Englishman took a one-shot lead over Cabrera-Bello into the final round. But after making a 35-foot eagle putt on the 2nd to go up by two, Westwood struggled with his putting the rest of the way, bogeying the 5th to fall into a tie with Cabrera-Bello and missing several birdie chances on the back nine.Instead, it was the 119th-ranked Spaniard who showed just the right touch down the stretch. He birdied the 17th for the outright lead. Then on 18, he took a conservative approach to the final par 5, just missing a long birdie putt but sinking a two-footer for par. Then he sat back and waited. Westwood, who had just missed an eagle putt on 16, found green side rough on the 18th in two shots. But his 20-yard chip ran well past the hole. He had a 25-foot birdie putt to force the playoff but it came up just short, ending his chances of winning his first tournament of the season.

But Cabrera-Bello’s wait was not yet over. Stephen Gallacher (69), who was a shot back after sinking a long eagle putt on 13, also had a chance to force a playoff. He needed to sink a 15-footer for birdie but his attempt rolled past.“It’s been a really, really special week for me,” Cabrera-Bello said as he accepted the trophy. “I played great the entire week. With so many big names up there, I really felt proud of myself. I wanted to fight. I stayed calm and I did everything I read you should do in these situation. It was really amazing.” Marcel Siem, who also started the final round one shot back, finished fourth with a 15-under total of 273. George Coetzee (70) of South Africa, Scott Jamieson (71) of Scotland, Soren Kjeldsen of Denmark and U.S. Open Champion Rory McIlroy (71) were a shot back in joint fifth. Dailytimes