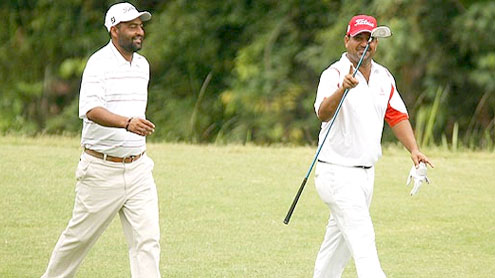 The four rounds 41st Pakistan Open Golf Championship,endorsed and sponsored by AKD   Securities,commenced at the par 72,Defence Authority Country Club Golf Course on Friday,and at the end of the first days competitive round the champion in theforefront was Shabbir Iqbal of Islamabad,who excelled with a score of gross 69,three under par.

Out of the 90 other aspirants in the professionals section,some very
capable and accomplished and some eager to get recognized,only six showed an appreciable urge and application of golfing skills to do well and appear as golfers of strength when it comes to facing Shabbir.The second slot in the first days leader board is occupied by Mohammed Munir from Islamabad.a golfer rated highly with outstanding attributes like courage and temperament.

With a first days round of gross 70 Munir is one stroke in arrears and possessing ample experience to tilt the battlehis way.Lagging behind Shabbir and Munir are champions like MatloobAhmed(Garrison,Lahore),at a score of 71,and three able ones like Shahid Javed Khan(Royal Palm),Talib Hussain(Islamabad),Ansar Mehmood(Islamabad),all four
bracketed a score of par 72.Imran Ali Khan of the host club is at 73.

During the first round yesterday Shabbir reflected the flair of a champion,the cool calm shot making reflecting superb control over his swing and accuracy the hall mark in every shot,be it off the tees or perfectly maintained fairways.Starting from teenumber 10,Shabbir completed the back nine in 35 and going into the front nine he improved on his putting and finished it in 34.Along the way Shabbir birdied holes
10,17 and 18 on back nine and 3,5 and 8 on front nine,supplemented by nine regulation pars.

Stroke losses were also encountered on three holes,but the collection of six birdies helped to overcome possibility of damage to the aggregatescore of the first 18 holes.As for Munir’s first round,it was equally excellent 35 in and 35 out,birdies on holes 2,5,12 and 13,twelve pars and a couple of strokelosses on holes 9 and 16,his round of 70 placing him next to Shabbir.

Another competitor of good standing is Matloob Ahmed and it is always a treat to watch him in action.His card of gross 71 looks exceedingly good and Matloob was overflowing with optimistic feelings when he said,”I enjoyed my game at a very good  golf course where playing conditions were as good as can be.I would love to look more competitive in the second round”.

Another significant feature for golf in Pakistan is that out of 90 competing
professionals,25 participants had good scores and though they are not amongst the top ones,the ability is there and definitely optimism about their passion is very much apparent.As the championship moves into the second round the top ones look determined to outdo each other without being overawed by Shabbirs giant like strength.