ALL EYES ON UNHERALDED KUMAR AT THE HERO INDIAN OPEN 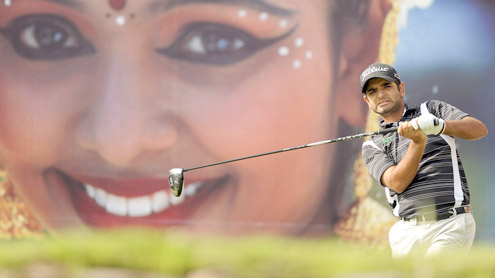 New Delhi: Chiragh Kumar of India raced into a three-shot lead to put himself in good position of securing a dream victory after the second round of the Hero Indian Open, a tournament which he highly regards as the fifth Major.

He battled to a solid five-under-par 67 to hold on to his overnight lead with a two-day total of 13-under-par 131 at his home course, the Delhi Golf Club.Australia’s David Gleeson, a two-time Asian Tour winner, eagled two holes for 66 to lie in second while Chapchai Nirat of Thailand, who holds the world 72-hole scoring record he set in India in 2009, was a further two shots back in third after his blemish free round of 67.Ross Bain of Scotland, Scott Barr of Australia and Young Nam of Korea were tied in fourth place on 137 in the US$1.25 million Asian Tour event.

Kumar, a 2006 Asian Games silver team medallist, surprised even himself after shooting another superb round to lead the chasing pack going into the weekend rounds.“I really didn’t expect to shoot another low number but I’m glad I did. The Indian Open is such a big tournament for us and it has grown tremendously. It is like a fifth Major to all the Indian players,” said the 27-year-old, who finished in tied 10th in the 2006 Indian Open as an amateur.Kumar, who stays approximately 10 minutes from the Delhi Golf Club, turned in 34 before adding three birdies on his homeward nine, highlighted by a huge 20 feet par putt on the sixth hole.

“That kept the momentum going as I was able to birdie the next two holes. It was a really good putt,” said Kumar, who had his family following him for the entire round.Gleeson continued to climb up the leaderboard courtesy of two eagles on holes one and eight which he sank from 10 and 20 feet respectively. “There are 36 holes to go and I got a lot of work to do to keep in contention. There are a lot of guys who still have a chance to make a charge and get close to winning the tournament,” said Gleeson, who finished second at the Macau Open last month.

Thailand’s Chapchai, who holds the world 72-hole scoring record with a 32-under-par 256 total, posted five birdies in a bogey free round without using a driver.“Driving will be the key. You need to keep your ball on the fairway and you will have a good chance to score,” said the three-time Asian Tour winner.The Dubai-based Bain got off to a fast start when he holed a monster eagle putt on the first hole from 35 feet before turning in 34. He couldn’t buy a putt on his homeward nine and returned with two bogeys.“I started like a house on fire which was nice. I’m a bit disappointed not to keep it going. I hit a couple of sloppy shots that cost me a few bogeys. I wasn’t as sharp as I wanted to be,” said the 35-year-old, who is searching for his maiden Asian Tour win.

The halfway cut was set at one-over-par 145 with a total of 70 players making the weekend rounds.