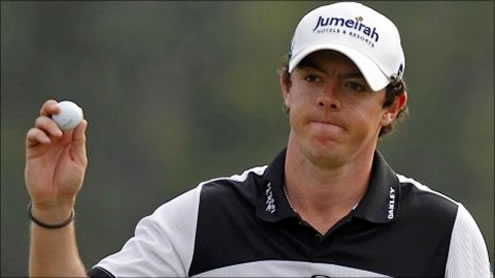 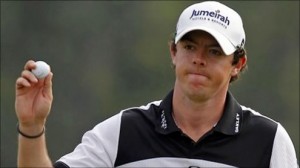 Rory McIlroy moved into a two-shot lead at the halfway stage of the 75th Masters after carding a solid 69.The 21-year-old’s three-under-par round lifted him to 10 under on an absorbing second day at Augusta.McIlroy’s playing partner Jason Day of Australia, fired a stunning eight-under-64 to climb to second place.Tiger Woods roared into contention with a 66 to move into a tie for third at seven under with South Korea’s KJ Choi who shot a two-under-par 70.Spain’s Alvaro Quiros, who led overnight with McIlroy, slipped back to six under par after a one-over-par 73, alongside Australian Geoff Ogilvy (69).

Last year’s runner-up Lee Westwood (67), South Korean YE Yang (72), Americans Ricky Barnes (71), Rickie Fowler (69) and 51-year-old 1992 champion Fred Couples (68) are all tied at five under.”I feel like I’ve got it under control,” said world number two Westwood. “I just need to be a bit more consistent and I can shoot a low score. “I had a five-shot lead going down 11 last year, so I know how quickly a lead can evaporate. My record shows that I’ve got the hang of Majors over the last few years.” Englishmen Luke Donald and Ross Fisher and Spaniard Sergio Garcia are among those on four under after rounds of 68 and 71 respectively, while defending champion Phil Mickelson carded a 72 for two under.

McIlroy, who has finished third in the last two majors, becomes the second youngest second-round leader after Woods, who was 21 years three months and 14 days old in 1997. The Northern Irishman carded three birdies in an outward 33, and made his first bogey of the tournament on the short 12th after catching the front bunker but he got the shot back with a birdie on the par-five 13th to come home in level-par 36. The 23-year-old Day, playing in his first Masters, fired five birdies in a homeward 31 to climb from a tie for 31st after round one.

“We just sort of fed off each other and the crowd got behind us and it was a lot of fun,” said McIlroy, who also played with Fowler. “I played nicely on the front nine but I didn’t hole so many putts on the back nine. But I can’t complain – I’m in the lead going into the third round of the Masters.” Woods fired six birdies in eight holes from the eighth and missed a six-footer on the short 16th which would have been four in row as he surged up the leaderboard. A stunning second on 18 set up another birdie as he stepped up his bid for a fifth Masters and 15th major title. “I’m right where I need to be,” said Woods, who last won at Augusta in 2005 and last won a major in 2008.

“I kept staying patient. I was trying to get under par at the turn and piece together a good back nine and I got a bit hot. “[The par save at] 11 was huge. It was a big putt to make. I closed the gap to three and hopefully I can piece together another good round [on Saturday].” Mickelson mixed four bogeys with four birdies in a scrappy round that left him needing to go low on Saturday to have a chance of clinching back-to-back Green Jackets for the first time since Woods in 2001-02. “I left too many shots out there,” said three-time winner Mickelson. “You know, there were six chances, up‑and‑downs, which I normally would make. Fortunately, I’m not in that bad a spot.

“These next two days are my favourite two days of the year, the weekend of the Masters. To be a couple under par you can make up a lot of ground out here. I was able to do it last year on Saturday, and I’m going to have to make a good run tomorrow, too.” Choi, who finished tied fourth last year, bogeyed the last but said: “I think my demeanour is still good.” Paul Casey also took 72 to end two under alongside 2008 champion Trevor Immelman (73) and big-hitting American Dustin Johnson (68). Two more Englishmen Ian Poulter (69) and good friend Justin Rose (71) both birdied three of the last six holes to finish one under and level par respectively, while Scottish debutant Martin Laird was also one under after a 69.

Fancied Americans Bubba Watson (71) and Nick Watney (72) finished level par with South Africa’s Ernie Els one over after a 70. The cut, to include the top 44 players and ties and those within 10 of the lead, came at one over, meaning world number one Martin Kaymer, Ireland’s three-time major champion Padraig Harrington, third-place last year Anthony Kim and US Open champion Graeme McDowell all missed the cut. Kaymer (72) ended six over and has now missed the cut in all four of his Masters appearances, while Harrington, who has been suffering with a sore neck, added a 72 to his opening 77 to finish five over. Northern Ireland’s McDowell made a triple bogey at the short 12th after failing to find his ball in the bank behind the green and ended with a 73 for three over. Spain’s two-time winner Jose Maria Olazabal, the new European Ryder Cup captain, ended six over, Scotland’s 1988 winner Sandy Lyle finished nine over and Wales’ 1991 champion Ian Woosnam was 11 over. – BBC