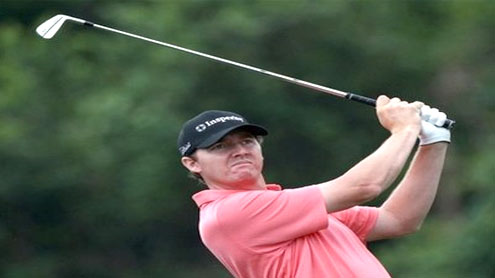 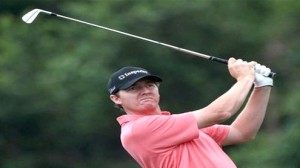 HOUSTON: Jimmy Walker equalled the course record with a nine-under par 63 to take a two-shot lead over Australian Nick O’Hern and Josh Teater after one round of the Houston Open.Walker on Thursday tied the record set by Johnson Wagner and Aussie Adam Scott in the first round of the 2008 tournament. Wagner went on to win that year.Chris Kirk was three back after a 66. It was a further stroke back to Steve Stricker, John Rollins, Australian Nathan Green and Brendan Steele on 67.Walker posted his record-equalling round despite hitting just five of 14 fairways. What he lost off the tee he made up on the greens as he needed just 23 putts.”I just kept stroking it,” said Walker, who completed his round without a bogey. “I felt like I kind of got back to feeling that stroke that I was using earlier in the year, when I was putting so good and playing so good.”Walker changed putters at the start of 2011 and has made six cuts in eight starts. He has three top 10 finishes this season.”When you putt well, it cures a lot of ills, for sure,” he said.

Several marquee players using the event as a tune-up for next week’s Masters were in the hunt.England’s Lee Westwood and Ireland’s Padraig Harrington were among a dozen players on four-under 68.Harrington said he was delighted with his game and his recent changes to it with the first major of the year looming next week at Augusta.”Absolutely I?m on schedule,” he said. “It puts a lot of pressure on me. If I can get into contention and get the pressure on me this week, it will be good for next week.”Harrington said his conservative approach on Thursday didn’t give him much chance to score lower.”I think we gave the pin positions a little too much respect,” he said. “I short-sided myself a few times. I think maybe I need to be a little more aggressive.”I?m on track, but I can do more. It?s within my control.”Reigning Masters champ Phil Mickelson and two-time US Open winner Retief Goosen were in the group on two-under 70, while former Masters champions Angel Cabrera and Fred Couples were both one-under.Mickelson consulted a rules official during the round, asking if he could replace his driver after he detected a small crack in it.The damage was not considered significant enough to warrant replacement, but Mickelson coped.His round included four birdies in five holes and he birdied his penultimate hole.”It flew fine there on the end after I thought there might be an issue,” Mickelson said. “It flew okay.” – Yahoonews