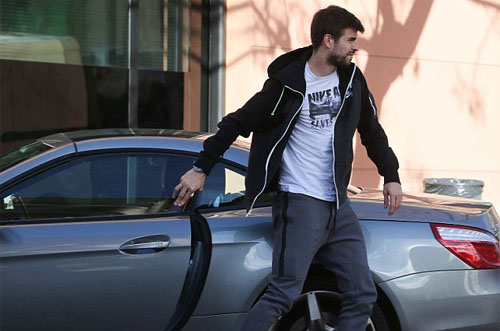 Soccer, the world’s most popular sport has not only got the most popular players but also the most stylish athletes. Soccer players are no less than super stars who exhibit great glamor and style. They are attractive, handsome and good looking.

The number of fans each one of them has is also because of this one reason. Football players are perfect example of men with good personality and style. Here in this article, we bring to you the Top 5 Most Stylish Football Players the world has ever produced. Their charming personalities and pleasing look boggles one’s mind. So, come, take a sneak peak and have fun browsing!!

Claudio Marchisio is an Italian footballer who plays great football. He is a man with his own style that suits him and lifts up his personality. He is at no. 5 on our list of the Top 5 Most Stylish Soccer Players. Marchisio, with his glamorous style, looks impressive both on and off field. He has got a number of fans who are crazy to have Claudio’s style of living.

He is a Spanish footballer and plays as a central defender for Barcelona. He portrays a dominant and stylish personality that makes him at rank 4 on our list of the Top 5 Most Stylish Soccer Players. Other than his amazing style of play, what adds beauty to his overall game is his dashing appearance. He has got a snazzy outlook and with his trendy hairstyle, Gerard is much popular among his fans. He is, thus, a man who is always seen up to the minute.

Lionel Messi is an Argentine footballer and he plays for Barcelona and the Argentine National Team. He plays as forward and his play in the game is always worth watching.

Despite his outclass playing style, Messi is a fashion icon for everyone. He is at no. 3 on our list of the Top 5 Most Stylish Soccer Players. He has got a much trendy style and he always shows up in his own contemporary style. He has got a huge fan following and his fans desire to be like him. He is, thus, fashionable yet modish in style.

David Beckham is the runners up on our list of the Top 5 Most Stylish Soccer Players. He is an English former footballer who has played for Manchester United, Real Madrid, The England National Team and for few others too. He is no less than a super model. He sparkles with his excellent personality and a snazzy snappy outlook. He is the man who, with his flashy looks, bedazzles everyone. He is a style icon and is much popular among his fans. His fashionable and trendy style is one reason of his immense popularity. Beckham is not only a great footballer but he is also a trend settler in the world of fashion.

Cristiano Ronaldo called as CR7 is a Portuguese footballer who plays as forward for Real Madrid and is also the captain of the Portugal National Team. Because of his elegant and polished style he is at no. 1 on our list of the Top 5 Most Stylish Soccer Players.

Ronaldo is a true fashion and style icon from the football world. He carries his own style which is unique yet much trendsetting. He possesses a good sense of style and is the man who has tried on numerous hairstyles. Cristiano Ronaldo is attractive looking, pleasing yet much fashionable who gives the world of soccer a new dimension. -sporteology

Ebola Cases in West Africa Could Reach 10,000 Per Week: WHO