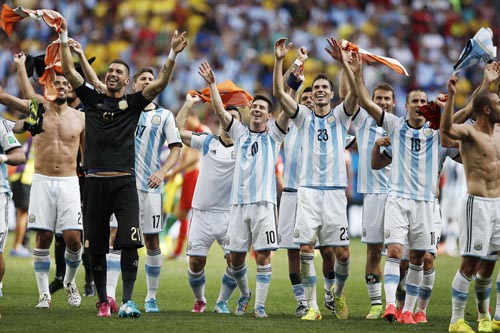 Goalkeeper Sergio Romero saved two shoot-out penalties as Argentina beat the Netherlands to reach the World Cup final for the first time in 24 years on Wednesday. Romero, who has hardly played for French club Monaco this season, blocked shots from Ron Vlaar and Wesley Sneijder as Argentina won the shoot-out 4-2 after the two sides finished extra time 0-0.

The win took Argentina into Sunday’s final at the Maracana Stadium in Rio de Janeiro where they will face Germany, who they lost to in the 1990 final in Rome. It is also a repeat of the 1986 final in Mexico City, where a Diego Maradona-inspired Argentina beat the Germans 3-2. The match had gone to penalties after an intense battle at the Corinthians Arena which saw neither side manage to break through disciplined defending.

A tense, cagey, contest saw barely a single goalscoring opportunity in normal time, save for a Messi free-kick which was gathered by Jasper Cillessen. Dutch captain Robin van Persie, whose place had been in doubt after a stomach problem, was substituted late in the game after an anonymous evening. The best Dutch opening fell to Arjen Robben in the closing stages, but his shot from a tight angle after a one-two with Sneijder was superbly blocked by Javier Mascherano. Netherlands 0 Argentina 0 (after extra time)