by Top
in Featured, Football
0 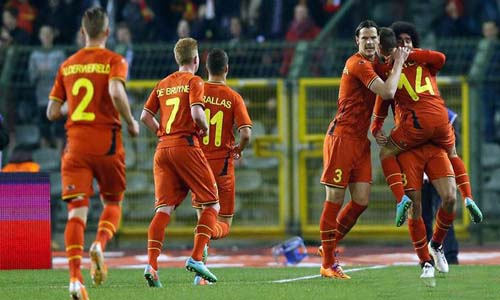 Kevin De Bruyne and Romelu Lukaku´s extra time goals fired Belgium past the United States with a thrilling 2-1 win and into the World Cup quarter-finals on Tuesday. Belgium, the final piece of the Brazil 2014 last eight jigsaw, were rewarded with a match-up against two-time winners Argentina in Brasilia on Saturday.

With the last 16 clash in Salvador goalless after regulation time, De Bruyne broke the deadlock in the 92nd minute. The Wolfsburg midfielder leapt onto Lukaku´s assist to fire low into the corner. Lukaku doubled up on 106 minutes, this time with an assist from De Bruyne, to seemingly put the tie to bed for the tournament dark horses.

But the United States´ Bayern Munich teenager Julian Green came on for the start of the second period of extra-time and reduced the deficit with his first touch. Belgium had some nervous moments but held out. Belgium´s best World Cup performance was reaching the 1986 semi-finals. -thnews