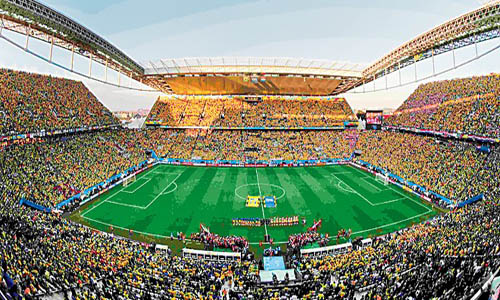 The 2014 World Cup is underway in Brazil featuring the globe’s best footballers. TNS gives you interesting facts and fugures about the world’s most watched sporting event:

• It was originally simply known as the World Cup but in 1946 it was renamed after the FIFA president Jules Rimet, the Frenchman, on whose initiative the first World Cup was held in 1930

• In 1970, when Brazil won the tournament the third time, they became entitled to keep the trophy permanently

• Since 1970, the teams have been competing for a new trophy called the FIFA World Cup Trophy. However, this trophy won’t become a permanent possession of a country; no matter how many times it is won by any

•   Vittorio Pozzo is the only person to be the head coach of two World Cup winning teams. He guided his native Italy to World Cup triumphs in 1934 and 1938

Note: Germany’s Miroslav Klose, who will be making his fourth World Cup appearance in this year’s edition, has scored 14 goals and thus stands a good chance to become the all-time top scorer

•  In a single edition: Frenchman Just Fontaine, with 13 goals in 1958, holds the record

•   In a single match: Russian Oleg Salenko scored five goals against Cameroon in 1994

•  Four players have scored two hat-tricks in World Cup matches: Sandor Kocsis of Hungary (both 1954), Just Fontaine of France (both 1958), Gerd Muller of West Germany (both 1970), and Gabriel Batistuta of Argentina (1994 and 1998). Batistuta is the only person to score hat-tricks in two World Cups

•   Only one player has scored a hat-trick in a World Cup final. Geoff Hurst scored three goals for England against West Germany in the 1966 World Cup final

•  Two players share the record for playing in the most World Cups: Mexico’s Antonio Carbajal (1950–1966) and Germany’s Lothar Matthaus (1982–1998) played in five tournaments

•  There was no official World Cup final match in 1950. The tournament winner was decided by a final round-robin group contested by four teams (Uruguay, Brazil, Sweden, and Spain)

Surprisingly, the USA, where football is not one of the more popular sports, holds the record of the highest average attendance per match for a World Cup: 68,991 in 1994

2002 World Cup held in Japan and South Korea was the only one to be hosted jointly by two countries:

•  715.1 million individuals watched the final match of the 2010 World Cup (a ninth of the entire population of the planet)

The Silver Ball and the Bronze Ball are awarded to the players finishing second and third in the voting, respectively

•  The Golden Boot for the top goal scorer (first awarded in 1982, but retrospectively applied to all tournaments from 1930). In recent times, the Silver Boot and the Bronze Boot have also been added

•   The Golden Glove Award (formerly the Yashin Award, in honour of the legendary Russian goal keeper) for the best goalkeeper, decided by the FIFA Technical Study Group (first awarded in 1994)

•  The Best Young Player Award for the best player aged 21 or younger at the start of the calendar year, decided by the FIFA Technical Study Group (first awarded in 2006)

• The Most Entertaining Team for the team that has entertained the public the most during the World Cup, determined by a poll of the general public (first awarded in 1994)

•  An All-Star Team consisting of the best players of the tournament has also been announced for each tournament since 1998.

10 Richest Footballers in the World