Cristiano Ronaldo back in Training with Portugal

by Top
in Featured, Football
0 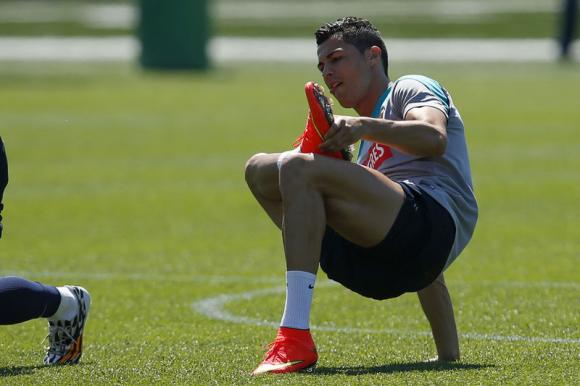 Cristiano Ronaldo back in training with Portugal

Cristiano Ronaldo, suffering with tendinosis around his left knee and an injury to his right thigh, trained with his Portugal team mates on Saturday for the first time since joining the World Cup squad 10 days ago.

Midfielder Raul Meireles was also involved in the session but central defender Pepe continued to train separately, the Portuguese Football Federation (FPF) said in a statement. According to media reports, Cristiano Ronaldo did not show any limitations during the first 15 minutes of the session which were open to the media. The World Player of the Year missed the recent friendlies against Greece and Mexico.

Ronaldo, 29, struggled with minor injuries during the closing weeks of Real Madrid’s season before playing 120 minutes in the Champions League final against Atletico Madrid and scoring the final goal in their 4-1 win, with a penalty. Portugal, who are training just outside New York, face Germany in their opening World Cup match on June 16. They also face United States and Ghana in their group. Meireles has a problem in his left thigh and Pepe a muscular injury in his right leg. – samaa