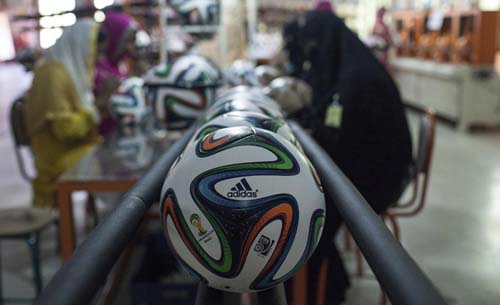 It was when he felt the roar of the crowd at the 2006 World Cup in Germany that Pakistani factory owner Khawaja Akhtar first dreamt up a goal of his own: to manufacture the ball for the biggest football tournament on the planet.

“The people were chanting all around me. I just thought, ‘This is the real thing’,” Akhtar told Reuters. “I was part of the crowd. I never had that kind of feeling before.” His factory in Sialkot had made balls for the German Bundesliga, French league and Champions League, but he had never snagged a World Cup contract. Last year he finally got his chance – but only 33 days to make it happen. When Akhtar heard last autumn that Adidas’ Chinese supplier for the World Cup couldn’t keep up with demand, he immediately invited executives to his plant. Their first visit was not a success. “They said ‘You have Stone Age equipment,” said his oldest son, Hassan Masood Khawaja, laughing.

“After they left, my father called a meeting and said: ‘This is our only chance. If we show them we can’t do it, we’ll never get another chance again.’” It usually takes six months to set up a production line, but the factory only had a month – Adidas, the German sports equipment maker, was in a hurry. So Khawaja designed, made and moved the equipment into place within 33 days. Everything had to be done from scratch. “It was hard, maybe the hardest thing I’ve ever done,” he said over the noise of the hot, hissing machines. But it was a success, and the firm’s previous investment in thermal bonding technology paid off. Only thermally bonded balls – made using a glue that reacts with heat – are round enough for the World Cup’s strict standards.

Cobblers to the British

A leading force in world cricket, Pakistan is a mere also-ran in football, where it ranks just 159th in the world. But Akhtar’s factory, where men and women in bright, flowing robes move plastic ball panels from machine to precision machine, is part of a long tradition of Sialkot football makers. Local legend tells of a poor cobbler who made his fortune by repairing the punctured footballs of colonial-era British soldiers, then studying how to make them himself. He was so successful that soldiers all over the region started buying from him. Business blossomed – but so did child labour. A series of scandals, and changing technology, forced many factories to close. Others had to clean up their acts.

These days foreign brands frequently inspect Sialkot factories that make their footballs. Large signs on Akhtar’s factory walls sternly proclaim that child labour is forbidden and unions are allowed. Workers that Reuters spoke to privately confirmed that conditions were good – the salary was mostly minimum wage, around $100 a month, but social security, life insurance and transport were extra benefits. A small government hospital sits on the premises. In the past 40 years, Akhtar’s own family business, called Forward, has grown from 50 men to 1,400 employees – nearly a quarter of them are women. Some wear the niqab. Others flaunt bright sandals with imitation jewels and wear robes the colour of tropical birds.

Almost all say they are the first woman in their family to work. Shakila Ashrafi, a 38-year-old mother whose long beige coat reached down to her ankles, said one of her first purchases was a television. When the World Cup kicks off in Brazil on June 12, they plan to invite their neighbours – all avid cricket supporters – to come and watch the strange foreign game being played half a world away. “We will bring everyone together to see the match,” she said, her busy hands pausing for a moment. “I want them to see what we make and where the balls go.” -tribune