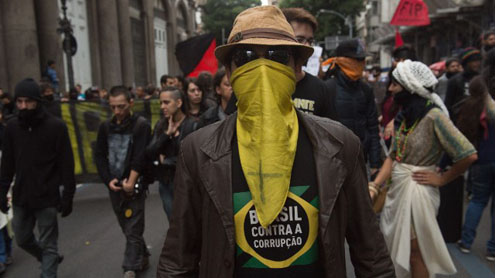 The cancellation of a prestigious football business event in Brazil has reignited the argument over whether the country will be ready to host the World Cup in June.

The Soccerex Global Convention was supposed to take place in Rio de Janeiro next month, with around 4,000 of the game’s top decision-makers scheduled to attend. But the event has been dropped, and the Soccerex organizers claim Rio’s state government made the decision due to concerns of “ongoing civil unrest” in Brazil.

Are Brazil protests the new normal?

The state government has “strongly denied” the accusation and says it was down to a funding dispute over the three-day conference.The state guarantees the security of multiple events, including New Year’s Eve on Copacabana beach, carnival, and the World Cup,” Rio’s state government said in a statement. “The government of Rio de Janeiro encouraged the organizers to seek cultural and sports incentives (funding) and they failed to do so.

Soccerex were advised to seek funding to host the event so that the state would not have to use public money.”The news is a blow to Brazil, which has been blighted by violent anti-government protests this year. Protesters are outraged at what they consider lavish spending on hosting the World Cup as well as the 2016 Olympic Games. They have also been critical of the lack of investment in public services, schools, hospitals and transportation — leading to thousands marching on the streets across the country.

The demonstrations marred Brazil’s hosting of last June’s Confederations Cup — an eight-nation tournament widely considered to be a small-scale rehearsal for the World Cup.The decision to cancel the conference has led to Soccerex issuing a statement to confirm its plans to take legal action against the Rio state government.

“Preparations for the event at the Maracana Stadium were well advanced with content planned, speakers confirmed and partnerships in place,” Soccerex said in a statement. “To be summarily canceled in such a cavalier fashion, having hosted 33 events over five continents, is extremely frustrating but nevertheless it has happened and is in contravention of all of the contractual obligations of the Rio State Government, who have been notified of our intention to instigate legal proceedings for substantial compensation.” Soccerex CEO Duncan Revie believes the move is “unique and cruel” and offered a full apology for the episode.

“On behalf of all at Soccerex, I would like to apologize to every business, football club, league, federation and media organization affected by this news,” he said. “This unique and cruel conclusion to our time in Rio was completely out of our hands and everyone who has attended a Soccerex event over the last 18 years will know this is not how we do business.” -Edition