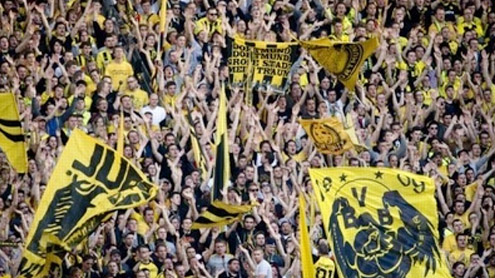 BERLIN: Champions League fever has broken out in Germany with fans of finalists Bayern Munich and Borussia Dortmund requesting a total of 750,000 tickets for the final at Wembley on May 25.

Dortmund had received 502,567 requests for tickets by the time of Sunday’s deadline for the open draw, with priority given to members and season-ticket holders, while Bayern have received around 250,000 orders for tickets with only members allowed to apply. Chances of receiving a coveted ticket are slim for both sets of fans, with each club’s allocation coming in at just under 25,000 seats for the UEFA showcase. Tickets for Wembley cost between 72 and 396 euros (£60-£334) and each successful applicant is limited to a maximum of two by both club, while Bayern’s draw has been made open only to fans who are registered members of the Bavarian giants’ 3,000 different supporters groups.

“Due to the large numbers of orders, it is not possible to make it an open draw for all fans, a strict criteria and a drawing of lots is the only fair way of dividing up the allocation,” said a Bayern Munich spokesman. This is the first time two German clubs have reached the European Cup final. Bayern, who beat Barcelona 7-0 on aggregate in their two-legged semi-final, are through to their third final in four seasons but last won the Champions League title back in 2001. Dortmund, who beat Real Madrid in the last four, are in their first final since winning the trophy in 1997. Airline company German Wings have said they will put on special chartered flights from Dortmund and Cologne/Bonn airports on the day of the Wembley final for German supporters. – DailyTimes