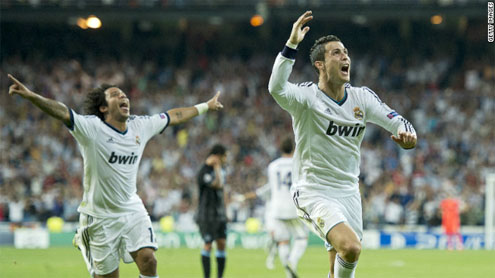 Defeat was cruel on the visitors who looked set to end Madrid’s remarkable record of never having lost an opening match at home in the Champions League and its forerunner, the European Cup, as City led 2-1 with three minutes left to play.Yet the Old Masters of Europe, who won the inaugural tournament in 1956 and whose tally of nine titles is unsurpassed, displayed all their experience as they finally sunk a team whose continental ambitions are being propelled by the wealth of Abu Dhabi-based owner Sheikh Mansour bin Zayed bin Sultan Al Nahyan.

Despite an injection of over £1.6 billion into the club in the last four years and taking the lead through substitute Edin Dzeko after 68 minutes, the Premier League side came away empty handed.After 76 minutes, Brazilian left back Marcelo equalized as his shot from the edge of the penalty area deflected off former Real Madrid player Javi Garcia before flying past City goalkeeper Joe Hart.The visitors thought they had won the game five minutes from time as a well struck free kick from Aleksandar Kolarov evaded a number of bodies in the box before creeping inside the far post.

Madrid — whose manager Jose Mourinho had publicly questioned his players’ commitment before the match after the team’s poor start to the Spanish league — had other ideas as Karim Benzema fired home a fine goal before Ronaldo’s last-minute strike somehow evaded both Hart and his centre back Vincent Kompany.In the other Group D tie, Germany’s Borussia Dortmund — whose sole Champions League triumph came in 1997 — eventually put home advantage to good use as they sunk four time winners Ajax Amsterdam 1-0.

The hosts had to wait until the 87th minute for their goal as Polish striker Robert Lewandowski crashed home from close range — to ensure that the evening was not remembered for the missed penalty by teammate Mats Hummels just before the hour.Another team whose fortunes have been revived by the input of enormous wealth from the Middle East enjoyed a far more comfortable night as Paris Saint Germain beat the Ukraine’s Dynamo Kiev 4-1 in the French capital.

PSG had not appeared in Europe’s leading club competition since making a tame group stage exit in 2004 but last year’s purchase of the club by the Qatar Sports Investment group soon changed that unwanted record.The Qataris spent £112 million on players in the summer and two of their headline arrivals — Swedish striker Zlatan Ibrahimovic and Brazilian defender Thiago Silva — scored in a convincing Group A victory.

Ibrahimovic converted a penalty to become the first player to score for six different clubs in the Champions League and shortly after, Silva — who was making his debut after becoming the most expensive player in French football history (joining from AC Milan in a £34m move) — doubled the lead.Silva’s compatriot Alex added another after 32 minutes and although Miguel Veloso pulled one back for the visitors late on, Javier Pastore added the gloss to the win with a stoppage time strike.In the day’s other Group A game, Portugal’s two time winners Porto won 2-0 at Dinamo Zagreb of Croatia thanks to goals from Lucho Gonzalez and Steven Defour.

Despite spending nearly £100m on just two players in the closing stages of the transfer window, Russians Zenit St Petersburg started their Group C campaign with a 3-0 defeat at Malaga.The Spanish side have encountered a troubled financial period in recent times after owner Sheikh Abdullah Bin Nasser Al-Thani, whose riches had turned the club from La Liga also-rans to Champions League debutants in just two years, suspended his injection of cash into the club.

After a failure to pay wages, players such as Spain’s double European champion Santi Cazorla and Dutch defender Joris Mathiksen left the club — but locally born Alarcon Isco made light of their absences with two stunning strikes either side of a Javier Saviola tap in.Zenit, whose big-money purchases of Brazilian striker Hulk (who played) and Belgian midfielder Alex Witsel (who did not) were largely enabled by hefty backing from Russian company Gazprom, lie bottom of Group C after seven time champions AC Milan could only draw 0-0 at home to Belgian visitors Anderlecht.

Elsewhere, Montpellier — who were also making their Champions League debut — went down 2-1 at home to Arsenal, the English side making their 15th consecutive appearance in the group stage of the competition.Highly rated Moroccan midfielder Younes Belhanda gave the French champions an early lead with a confident penalty but the Gunners staged a turnaround as quick as it was dramatic.

After 16 minutes, Olivier Giroud — who was returning to a club where his 21 league goals last season were crucial to Montpellier’s first title — teed up Lukas Podolski to slot home before Gervinho completed the scoring just two minutes later.Montpellier were unlucky not to win a penalty after Abou Diaby felled Remi Cabella, but Arsenal held on to go top of Group B with Germans Schalke 04, who beat Olympiakos 2-1 in Greece with goals from Benedikt Howedes and Klaas-Jan Huntelaar. – CNN

Saudi Arabia to invest $400m to $1bn in Pakistan