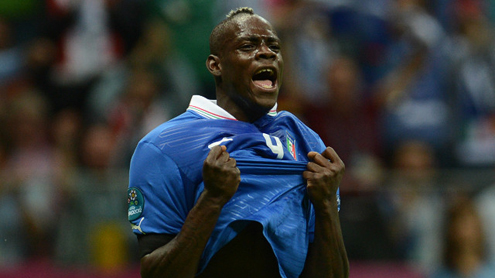 Mario Balotelli’s first-half double saw Italy through to the final of Euro 2012 as they stunned Germany in Warsaw.

Germany were hot favourites going into this semi-final but Balotelli struck twice before half-time and Germany were unable to claw their way back.  Mesut Ozil pulled a goal back from the penalty spot in injury time, but Italy deservedly held on to set up a final against Spain on Sunday.   The win continues Italy’s remarkable record in major tournaments against Germany, who have failed to beat the Italians in eight attempts.  This emerging young German side were tipped by many to go all the way at this tournament, but their burgeoning progress was checked by a clinical Italy team.

Germany started the match as expected and the Italians were lucky to survive a couple of early wobbles by their goalkeeper Gianluigi Buffon.  The Italy captain was caught in no-man’s-land early on, allowing Mats Hummels to poke goalwards only to see Andrea Pirlo scramble the ball off the line.  Minutes later, Buffon pushed out a Jerome Boateng cross and was relieved to see the loose ball bounce off his own defender, Andrea Barzagli, and behind for a corner.  But midway through the first half it was Italy who made the breakthrough with a quite brilliantly worked goal. Germany stood off Pirlo, allowing the Italy playmaker to sweep a pass out to Giorgio Chiellini who fed Antonio Cassano.

Cassano superbly spun away from two defenders and swept in an inviting cross that allowed Balotelli to drift away from Bastuber and head home from close range.  Sixteen minutes later, the Italians remarkably doubled their lead with a sweeping counter-attack following a Germany corner.  Italy left two strikers forward and the tactic paid off as Riccardo Montolivo swept a long ball over the head of Philipp Lahm, allowing Balotelli to chest the ball down and run clear before smashing an unstoppable shot beyond a stunned Manuel Neuer.  The first-half double saw the young Manchester City striker double his international goal tally — having scored just once coming in to Euro 2012 Balotelli is now the tournament’s joint leading goalscorer on three.

Germany needed a response in the second half and they got it in effort, but not in goals.  A smart one-two on the edge of the area between Lahm and Toni Kroos ended with Lahm  sidefooting over when he should have hit the target. A goal then would have ensured a fascinating second half , but Italy looked just as likely to score again as Germany increasingly gambled at the back.  Balotelli curled a shot across the face of goal before limping off with cramp and Claudio Marchisio twice drilled wide from inviting positions as Italy failed to kill off the German threat.

Substitute Antonio Di Natale wasted another golden chance eight minutes from time when he ran clear but fired into the side netting, but at the other end Italy’s defending was outstanding.  That resilience was emphatically underlined by Federico Balzaretti’s goal-saving tackle to keep out substitute Marco Reus late on, although Balzaretti’s handball in stoppage time did give Ozul the chance to score from the spot. That came too late to save Germany though and Italy now face a Spain side who they held 1-1 in the group stages earlier in this tournament.-CNN