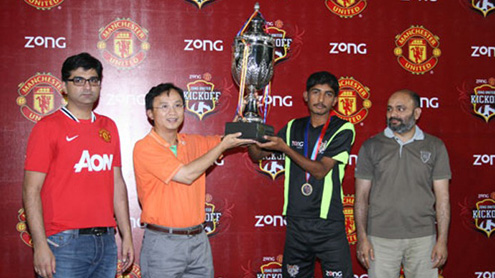 The final score of the match was 0-0, with the fiercely-contested match heading into sudden death to determine the eventual winner. Players of both teams have successfully qualified to participate in a 5 day training program at Manchester United’s state-of-the-art Soccer School in Abu Dhabi. Both sides demonstrated a good, clean game, with not a single booking made during the entire match. There were equal shots on goal from both ends, with neither team yielding possession of the ball for long periods of time. After 60 minutes of football, with no change on the scoreboard, the match went into overtime and still failed to produce a result.

When the match finally went into sudden death, a momentary lapse in concentration by the Carrick United goalkeeper provided Rooney United the fitting victory. The 2 months long knock-out tournament was participated by 128 teams. Usman Ishaq, ZONG Executive Director Commercial announced that besides the selected players, all the 16 players of the Carrick United Karachi team will also join the Rooney United team in Abu Dhabi. Feng Tuixian, CFO ZONG said: “I would like to offer my heartiest congratulations to both Carrick United Karachi and Rooney United Faisalabad to making it to the final of the Zong tournament.” -Pakistantoday