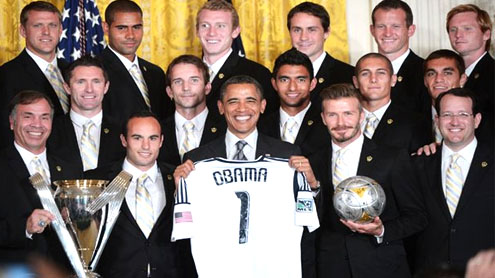 President Barack Obama teasingly described David Beckham as a “rare man” who could balance a long football career with producing his own line in underwear.

The former England captain his LA Galaxy team mates were lauded at the White House after winning the Major League Soccer Cup, America’s equivalent of the Premiership.Turning to the 37-year-old Beckham, Mr Obama described him as “young up-and-comer”. To laughter from his team mates, the President said: “I have to say I gave David Beckham a hard time, and told him half the team could be his kids. We’re getting old, David.”

But he conceded that the footballer was “holding up better than me” and said it was a ” a rare man who can be that tough on the field and also have his own line of underwear”. Beckham grinned with embarrassment as the young squad aroung him burst into laughter.Already a major star in the US, his profile was further lifted by a sultry Superbowl ad where he modeled tight underpants for H&M before an audience of more than 160 million Americans.

Mr Obama also singled out Robbie Keane, the former Tottenham striker who joined LA Galaxy last year.The President, who often makes light of his tenuous Irish heritage, described the Ireland captain as “a cousin of mine”.”His teammates were so happy to have him that they filled his locker with what they called the ‘pleasures of Ireland’ – Guinness, Bailey’s, and Irish Spring. Hopefully Robbie has broadened their horizons a little bit since then,” Mr Obama said before being presented with an LA Galaxy jersey. – Thetelegraph