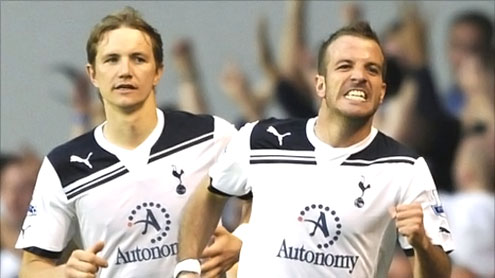 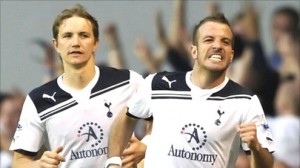 Arsenal’s Premier League title hopes were dealt another devastating blow as they squandered a two-goal lead to draw a north London derby classic with Tottenham at White Hart Lane.Gunners boss Arsene Wenger needed victory desperately to apply pressure on Manchester United after the leaders drew at Newcastle United on Tuesday – but this share of the spoils leaves Arsenal third in the table and six points adrift with only five games left.In a contest that was enthralling from first whistle to last, Theo Walcott put the visitors in front early on only for Rafael van der Vaart to peg them back as Spurs drew level quickly.Samir Nasri and Robin van Persie looked to have given the Gunners command as the interval approached, but Tom Huddlestone’s goal for the home side right on half-time was pivotal, giving Harry Redknapp’s side renewed hope.And it was justified as Van der Vaart scored from the spot with 20 minutes left after Arsenal keeper Wojciech Szczesny fouled substitute Aaron Lennon, giving Spurs a point they deserved and moving them to within two points of fourth-placed Manchester City as the hunt for a place in next season’s Champions League intensifies.

Wenger, animated throughout, looked resigned at the end of a magnificent game that was a credit to both sides – something that will be little consolation to the Gunners’ boss as he now stares at the prospect of another season without a trophy.The north London duo provided a feast of flowing attacking football, a candidate for the Premier League’s best game of the season, that allowed Szczesny and his Spurs counterpart Heurelho Gomes to excel by producing a series of outstanding saves.And there was little doubt Redknapp was the more satisfied manager when referee Martin Atkinson blew the whistle on a breathless evening in which Arsenal stretched their unbeaten league run to 16 games but probably lost their battle to win the title.Wenger surprisingly left out Jack Wilshere to accommodate Alex Song in central midfield – and the teenager was as gripped as everyone inside White Hart Lane by a sensational first half.Arsenal struck the first blow after five minutes when Walcott’s pace took him on to Cesc Fabregas’s pass and away from the Spurs defence to roll a cool finish beyond Gomes into the corner.The celebrations lasted less than two minutes as Redknapp’s side struck back swiftly, Van der Vaart scoring at Szczensy’s near post from Vedran Corluka’s pass into the area.In a scintillating opening spell, the Gunners were back in front with only 12 minutes gone. Abou Diaby found Nasri 20 yards out and his shot took a faint touch off Michael Dawson to beat the unsighted Gomes.

Walcott’s speed was posing a problem Spurs were struggling to solve and he was inches away from increasing the visitors’ lead after 28 minutes when he was released by Van Persie – and Spurs were almost on the mark themselves when the industrious Luka Modric saw his shot blocked by Szczesny.Wenger’s men looked to have put daylight between themselves and their opponents five minutes before the interval. Van Persie was the scorer from close range after Gomes had done brilliantly to claw out his header.It was a lead that was reduced only five minutes later as the half came to a stunning conclusion, Huddlestone thumping a finish past the motionless Szczesny after Fabregas could only partially clear.The hosts also had presentable claims for a penalty rejected by referee Atkinson when Modric tangled with Johan Djourou as he raced into the box.Redknapp was forced into a double change at the start of the second half, with Gareth Bale and Corluka being replaced by Younes Kaboul and Lennon. Bale had been struggling badly after two hefty collisions with keeper Szczesny – although on both occasions the Arsenal keeper’s challenges were perfectly acceptable.The Gunners had not been found wanting in the physical exchanges and both Song and Djourou were booked early in the second half for fouls on Modric as Spurs pressed forward in an attempt to force an equaliser.

Wenger then introduced Wilshere for Diaby, who had picked up a knock, and cut a tortured figure in the technical area as Walcott once again sliced the home side open, only to see his delivery fly across the face of goal without any team-mate able to apply the decisive touch.Redknapp’s men had exerted more control and levelled again with 20 minutes left, Van der Vaart scoring from the spot after Szczesny had fouled Lennon.Arsenal’s talented young keeper then made amends with a crucial point-blank block from Modric when it seemed certain the Croat would give Spurs the lead for the first time in this rollercoaster encounter.Gomes was hardly idle at the other end, twice saving well from Fabregas as the visitors knew a draw would not be sufficient as they chase down Manchester United.Szczesny was next to excel with a save of agility and excellence to turn Peter Crouch’s goalbound header over the bar. He followed this up with further saves from Van der Vaart and Spurs substitute Sandro.Honours ended even – but for Wenger and his players this may well prove to be the final setback in a frustrating and fruitless hunt for the title. – BBC

Khosa says HEC to continue as it is