by Top
in Football
2 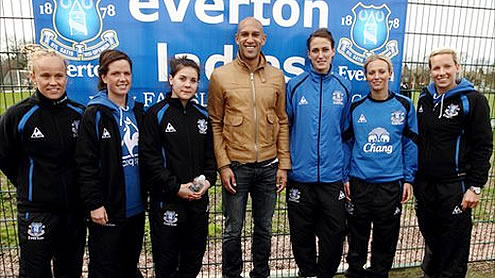 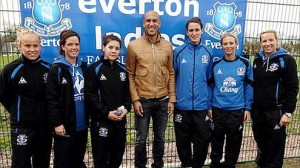 Everton goalkeeper Tim Howard has urged the club’s fans to support Everton Ladies as they enter a new era in women’s football.The Blues are one of eight clubs to play in the inaugural season of the new Women’s Super League, which starts this month and will be played during the summer.The new set-up is backed by £3m from the Football Association and Everton are founder members of the new division along with Arsenal, Liverpool, Chelsea, Doncaster, Bristol, Lincoln and Birmingham.Howard, a United States international, is no stranger to the women’s game as it is commonplace for girls to play the sport from an early age in his home country.

“There is a lot to be said for going out and supporting the girls and giving them an opportunity to show what they have,” he told BBC Radio Merseyside.”With the league being in the summer, there’s a great opportunity for fans who might not normally go out to see them.”It makes sense, particularly if you’re an Evertonian, so why not go and see the women because they put on a fantastic show.”The Everton goalkeeper, who moved to Goodison Park from Manchester United in May 2006, has backed the Blues to once again show their quality this season.

“They’re one of the benchmark teams in the league and for the country to look at,” said Howard. “I know Arsenal do a great job as well with their ladies team and quite a few others do, but Everton seem to always be up there and in the reckoning.”They have really talented players and England internationals and they’re doing things the right way – that’s for sure.”Rachel Brown is the Everton and England number one, and is in line to play at this summer’s World Cup in Germany and in the 2012 Olympic Games in London.She has been involved in the game for the past 15 years since she made her debut for local rivals Liverpool at the age of 15.

The 30-year-old has seen the development of the game over that time and admits girls coming into the game now are more fortunate than she was.”I wish this happened a few years ago,” said Brown.”People say women’s football doesn’t get the credit and it’s not as far forward as it should be. But when I look at it now from where it was 15 years ago, it’s made a massive step forward.”There’s been a progression in the standard of football, there’s over a million women and girls playing football in this country now – that is phenomenal really.

“When I started there were no girls teams and no centre of excellences for girls. There was just an England senior women’s team, no under-15s, 17s, 19s and 23s as we have now.”In so many ways the game has progressed in that time and this is hopefully a stepping stone towards bigger things in the future.” – BBC