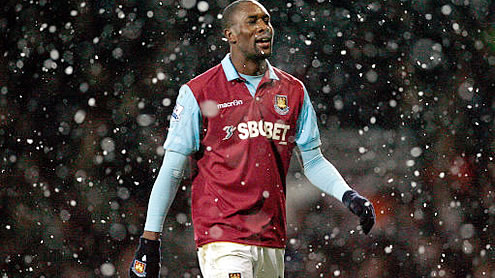 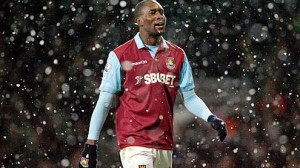 Carlton Cole has been charged with improper conduct by the Football Association for his comments on Twitter during England’s friendly with Ghana.The West Ham striker referred to the large numbers of Ghana fans at Wembley Stadium in comments he later deleted.Cole, 27, tweeted: “Immigration has surrounded the Wembley premises! I knew it was a trap! Hahahaha.”The only way to get out safely is to wear an England jersey and paint your face w/ the St. George’s flag!”

The England international, who won his last cap in March 2010, claimed his comments on the social networking site were a joke and has until 1600 BST on 13 April to respond to the charge.Lord Ouseley, head of Kick It Out, football’s equality and inclusion campaign, said: “We continually urge the responsible use of mediums such as Twitter, particularly due to their increasing accessibility and popularity.”What can seem like harmless comments can be deemed offensive by others and lead to unwittingly reinforcing negative stereotyping, including racist ones.

We will work with all our partners to ensure that education on what is and isn’t unacceptable behaviour is ongoing.”Cole’s reprimand is the latest in a number of incidents regarding Twitter that the FA has felt the need to investigate.In January, Dutch winger Ryan Babel was fined £10,000 and warned about his future conduct by the FA over a post he made on Twitter.Babel, who was a Liverpool player at the time, linked to a mocked-up picture of referee Howard Webb in a Manchester United shirt in reference to the official awarding a penalty to the home side and sending off visiting captain Steven Gerrard in Liverpool’s 1-0 FA Cup defeat at Old Trafford.

The following month, Arsenal’s Jack Wilshere escaped punishment after tweeting about referee Phil Dowd following his side’s 4-4 draw with Newcastle.The FA looked into the matter but stopped short of punishing the midfielder.During last year’s World Cup in South Africa, England’s players were banned from posting comments on Twitter or Facebook or writing articles for newspapers for the duration of the tournament – BBC