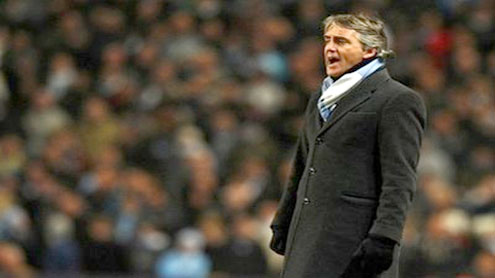 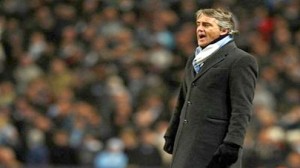 MANCHESTER: Manchester City manager Roberto Mancini has set his sights on a top-two finish in the Premier League after claiming his refreshed players can get even better in the last seven games of the season.A crushing 5-0 victory over Sunderland at Eastlands on Sunday saw Mancini’s expensively-assembled side climb above Chelsea into third place in the table.Although Mancini said his side had left themselves too much to do to catch Manchester United as they lie 10 points behind the leaders, the Italian believes that second place is not beyond his team.City are just three points behind second placed Arsenal, who have played a game less, with 21 points left to play for.”The gap is three points and we can improve,” said Mancini. “It’s important now that we continue and we go to Liverpool next week looking for a win. We can improve.”The five-goal romp against Sunderland was City’s biggest league win of the season and came on a weekend when rivals Arsenal, Chelsea and Tottenham all dropped points.

Adam Johnson, Carlos Tevez, David Silva, Patrick Vieira and Yaya Toure were all on the scoresheet and Mancini believes his players will benefit from having more time off after their recent Europa League exit.He added: “It was important for us to win this game after the results this weekend.”What was the difference? We have had time to train. We started the game right. I’m surprised but happy that we scored five.”The match was watched by Manchester United manager Sir Alex Ferguson ahead of the FA Cup semi-final against City at Wembley on April 16 and Mancini is confident the Scot will have been impressed with what he saw.”He knows the semi-final is a one off game and anything can happen,” added Mancini. “He knows Manchester City very well just as we know all about Manchester United.”Sunderland manager Steve Bruce was furious with his players’ lacklustre effort and claimed they are now locked in a relegation fight even though they have a six-point safety cushion with seven games remaining.

Sunderland were challenging for a Europa League spot a few weeks ago but have now lost six of the last seven league games – a run Bruce labelled “horrific”.”From start to finish it was brutal,” said Bruce. “We were second best and got what we deserved. We got our backsides well and truly kicked.”We pride ourselves on giving teams a game, but that has just not happened this time.”We had two or three players who performed okay, but when you come to places like Manchester City then you need the whole team to play well.”We haven’t got enough points in the bag. We need some more points before we can say we are safe.”We have been on an horrific run. But we have now got the bottom six coming up plus Bolton. It’s up to us.”We have got to get back that resilience that we showed earlier in the season. We have lost that cutting edge and it’s a bit of a worry.” – Yahoonews