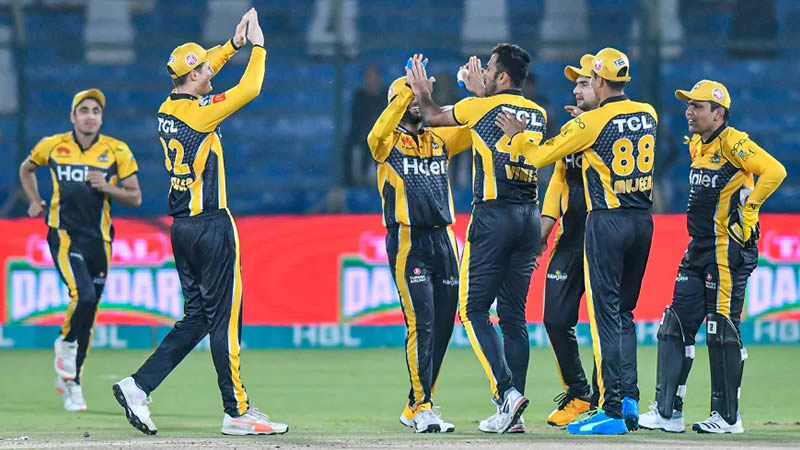 Peshawar Zalmi on Tuesday made it to the final of the Pakistan Super League’s sixth edition after triumphing over Islamabad United by eight wickets after a 175-run chase.

The Zalmi — who have reached the final for the fourth time — will now face Multan Sultans on June 24 at Abu Dhabi’s Sheikh Zayed Cricket Stadium.

Zalmi skipper Wahab Riaz put the United to bat first, who scored 174 for the loss of nine wickets.

Hasan Ali’s start with the ball was not as effective as his batting in the first innings — where he hit 45 off 16 balls. The pacer gave away a total of 15 runs, including six extras, in the first over. However, he wrapped it up on a positive note by dismissing Kamran Akmal (8) in the last ball.

Mohammad Wasim was finally able to give a breakthrough to the United as he dismissed Zazai (66) in the 15th over, breaking the 126-run partnership between the Afghan batter and Wells (55).

Shoaib Malik (32), who came to the crease after Zazai was dismissed, hit three consecutive fours in the 17th over to end the match on a high and take his team to the finals.

Islamabad United handed a 175-run target to the Peshawar Zalmi.

Skipper Riaz and Umaid Asif got two wickets each, while Amad Butt, Mohammad Irfan, and Mohammad Imran were able to pick up one wicket each.

Shoaib Malik’s delivery in the first over to Colin Munro saw in the unfortunate dismissal of Khawaja (0) who was run out when the batsman smashed it down to Malik and the veteran all-rounder’s shoelace touched the ball and hit the non-striker’s end, helping his team get the first, and important breakthrough.

In the second over, pacer Imran had Akhlaq (7) caught behind, as the batsman attempted to hit it over fine leg, giving wicketkeeper Kamran Akmal an easy catch.

To end the powerplay in style, Munro (44), in the sixth over, hit 19 runs — three fours, one six, and a run — to Asif to bring his team back in the game and shift the pressure back on to Zalmi.

In the eighth over, Malik dropped the catch of Brandon King, but Butt did not give up and dismissed the West Indies batsman for 18 in the last ball of the over, with a comfortable catch by Asif.

Akmal dropped an important catch of Munro in the ninth over — which according to commentator Ramiz Raja was tantamount to dropping half of the match — but three balls after, he took the much-needed catch, and Irfan had New Zealand batter caught behind for 44 runs.

Pacer Irfan started struggling due to what appeared to be an injury on his foot after completing four overs for 21. The umpires seemed unsatisfied with the explanation, and the Zalmi were a fielder down.

Iftikhar (10) was dismissed in the 13th over after he nicked the ball and got caught behind — giving the Zalmi captain Riaz his first wicket.

Asif, in the 15th over, bowled a short ball with extra bounce to Shadab Khan (15), who nicked the ball and sent it safely into the wicketkeeper’s hands.

In the same over, Asif was able to get an important wicket of Ali (8), with an impressive catch by the Sherfane Rutherford, just yards away from the ropes.

The umpires, in the 15th over, allowed Zalmi to replace Irfan with a substitute after they were satisfied that he was injured.

Riaz took the eighth wicket for his team after he dismissed Ashraf (1).

Ali was able to turn things around for the United, as he took Zalmi’s skipper to the sweepers by hitting 18 runs in the 19th over.

Despite 16 runs coming from the last over of the match, the Zalmi were able to dismiss Ali for 45 runs.