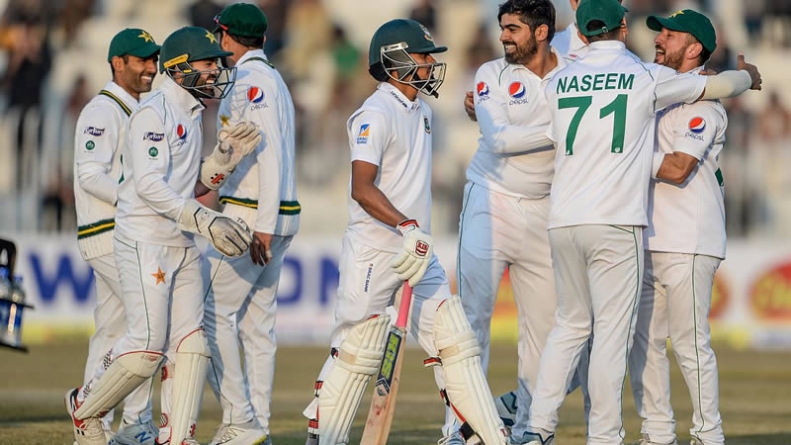 Pakistan on Monday won the first Test against Bangladesh by an innings and 44 runs at the Rawalpindi Cricket Stadium in Rawalpindi.

With the win in less than 90 minutes on day four of the Test, Pakistan secured a 1-0 lead in the two-match Test series. The second match will be played in Karachi from April 5-9.

Resuming on 126-6 after conceding a first-innings lead of 212, Bangladesh could not make Pakistan bat again and were all out for 168.

Yasir Shah (4-58) claimed two of the last four wickets. The onus was on Mominul Haq (41) to try to erase the deficit but the Bangladesh skipper fell lbw to Shaheen Afridi in the very first over of the day. Mominul reviewed the decision but could not get it overturned.

The leg-spinner dismissed Liton Das for 29 and then induced Abu Jayed into a wild slog with Asad Shafiq running back from slip to collect the top edge.

On Sunday, teenage paceman Naseem Shah became the youngest player to record a Test hat trick as Pakistan closed in on victory against the visitors. He finished with 4-26. According to ESPNcricinfo, Shah, who didn’t bowl today, was awarded the Man of the Match.

“I had an MRI, I had a muscle pull but the scan is clear. I should be able to resume bowling in two days. Picking up a hat-trick in front of your home crowd is special. They added to the support and festivities. It was great fun. I only hope I will be able to live up to the expectation of fans and team-mates,” he was quoted as saying.
Bangladesh Test tour

Bangladesh was originally scheduled to play three Twenty20 Internationals and two Test matches, but agreed to split the tour into three phases because it did not want to stay in Pakistan for a longer duration due to security concerns.

After this Test, the side will return to Pakistan in April for a one-off One-Day International (April 3) and the second and final Test (April 5-9) at the National Stadium in Karachi.

Pakistan won the T20 series 2-0 last month at Lahore, with the third game abandoned because of rain.