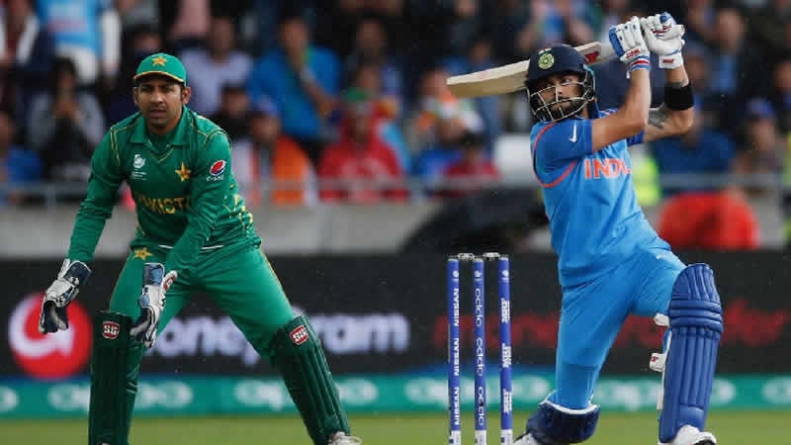 India captain Virat Kohli and Yuvraj Singh made Pakistan pay for fluffing catches with quickfire fifties as the holders launched their Champions Trophy title-defence with a 124-run thrashing of their arch-rivals at Edgbaston on Sunday.

After India made 319 for three in 48 overs, the third rain stoppage of the match left Pakistan with a revised target of 289 in 41 overs when play resumed in bright sunshine. But Pakistan, rarely up with the stiff run-rate, finished on 164, with injured last man Wahab Riaz unable to bat as India won with 44 balls to spare. Kohli, who on Saturday had dismissed reports of a rift with India coach Anil Kumble, was equally contemptuous of Pakistan s attack during a blistering innings of 81 not out off just 68 balls that included six fours and three sixes. Left-hander Yuvraj, named man-of-the-match for his game-changing innings, smashed a rapid 53 while helping Kohli add 93 for the third wicket in just 59 balls.

That was not the end of the run spree, with Hardik Pandya hitting sixes off the first three balls of left-arm spinner Imad Wasim s last over of the innings. India smashed 72 off their final four overs as Pakistan s attack wilted. Rohit Sharma (91) and Shikhar Dhawan (68) laid the platform for a big total with an opening stand of 136. I got lucky and got dropped and I capitalised,” said Yuvraj at the presentation ceremony. Meanwhile an admiring Kohli, one of the world s leading batsmen, said of Yuvraj: “I felt like a club batter next to him. He s a game changer with the bat.” Mohammad Amir was the pick of Pakistan s attack with none for 32 in 8.1 overs. But fellow left-arm fast bowler Wahab was hugely expensive, his wicketless 8.4 overs costing 87 runs.

Wahab s day was summed up when he was unable to complete his ninth over after falling awkwardly in his delivery stride. Pakistan captain Sarfraz Ahmed said he had “no regrets” over his decision to field first. We were in control for 40 overs but we lost the plot in the last eight overs,” the wicket-keeper added after what was the opening Group B match for both the Asian giants in a tournament featuring the world s top eight one-day international teams. The worrying thing for me, and it has been for a period of time, is we just do the basics wrong,” said Pakistan coach Mickey Arthur. We dropped simple catches, we don t run well enough between wickets,” added the concerned South African after his first direct involvement in an India-Pakistan match, world cricket s most high-profile fixture. Before play, the teams officials and a crowd of 24,156 — a record for an Edgbaston ODI — observed a minute s silence for the victims of Saturday s London terror attack that killed seven people. Sharma was fortunate on 21 to edge Amir just beyond the grasp of diving slip Azhar Ali.

Pakistan were donated a wicket, however, when Dhawan hoisted a full toss from teenage leg-spinner Shadab Khan straight to Azhar at deep midwicket. Sharma went 43 balls without a boundary in the face of tight Pakistan bowling before cover-driving and pulling Wahab for a four and a six off successive deliveries. But eyeing what would have been his 11th ODI hundred, Sharma was run out when he just failed to beat Babar Azam s throw to Sarfraz after Kohli s call for one. Sharma s 119-ball innings included two sixes and seven fours. Yuvraj should have been out for eight but Hasan Ali, sliding round at long-off, dropped the two-handed catch off Shadab.

Hasan eventually had Yuvraj lbw on review but it was all too late. Kohli had made 43 when he was missed by substitute Fahim Ashraf who grassed a top-edged hook off Wahab. A blizzard of boundaries followed, with Kohli flat-batting Hasan down the ground for six to complete his fifty. Pakistan opener Azhar make exactly 50 before he was caught at deep square leg by Hardik Pandya off left-arm spinner Ravindra Jadeja to leave his side in trouble at 91 for three. No member of India s attack leaked runs the way Wahab had done, with paceman Umesh Yadav, who took three for 30 in 7.4 overs, ending the match when he dismissed Hasan for a duck.