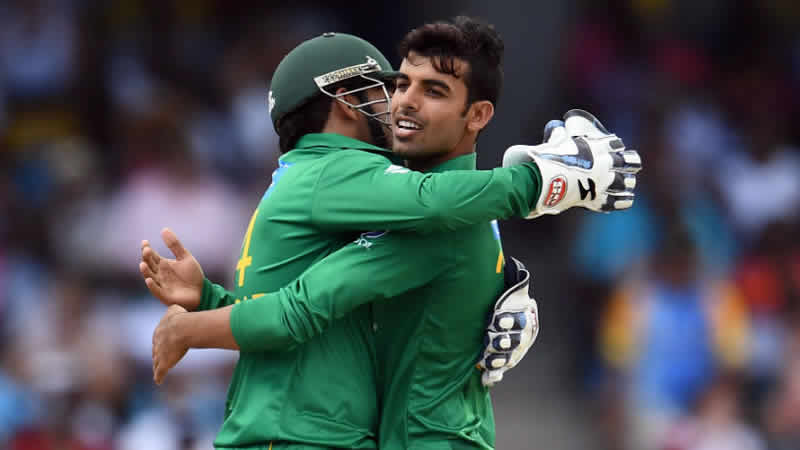 Shadab stars on debut as Pakistan ease past Windies

Shadab Khan produced an outstanding debut performance as Pakistan completed a comfortable six-wicket victory over the West Indies in the first fixture of a four-match Twenty20 international series at Kensington Oval on Sunday.

Put in on a bright, breezy afternoon, the world champion hosts were restricted to 111 for eight off their allotted 20 overs with the tourists knocking off the runs with almost three overs to spare to extend their T20 winning streak over their rivals to four following a 3-0 sweep in the United Arab Emirates last September. Shoaib Malik s unbeaten 38 and a 46-run fourth-wicket partnership with Babar Azam ensured Pakistan reached their target with relative comfort although they will be again concerned about the top order s inability to take control of a modest challenge. Brought on as the fifth bowler when the West Indies batted in what looked like ideal conditions, 18-year-old Shadab s mesmerising mixture of leg-breaks and googlies earned him figures of three for seven, the most economical ever in the history of T20 international cricket by a debutant in a complete four-over spell. I gained a lot of confidence from my performance in this year s Pakistan Super League,” said man of the match Shadab.

I just hope I can continue from this good start and make more important contributions for Pakistan.” West Indies only managed to get into three figures thanks to an unbeaten 34 from captain Carlos Brathwaite. He dominated a 37-run eighth-wicket partnership with fellow-Barbadian Jason Holder, who was dismissed off the last delivery of the innings. It s back to the drawing board again for us because it s up to these same players to look at themselves in the mirror and honestly assess what s going wrong,” said Brathwaite. At least I was able to get some runs which took some of the pressure off me personally.” Shadab removed opening batsman and wicketkeeper Chadwick Walton and dangerous middle-order strokeplayer Lendl Simmons in his first over before adding the scalp of Sunil Narine in his second. Kamran Akmal, back in the national T20 side after an absence of three years, deprived the newcomer a fourth wicket when he failed to hold on to a diving catch at backward point offered by Kieron Pollard.

For all the struggles they faced against Pakistan s talented and varied bowling attack, the home side s troubles started when Evin Lewis was run out in the third over of the match by Ahmed Shehzad s direct hit from 40 metres out as the batsman attempted to complete a second run. Marlon Samuels was unfortunate to be adjudged leg-before to Pakistan s other slow bowler, Imad Wasim. Thereafter it was a combination of impatience and poor shot selection which the visitors capitalised upon. Unlike the impressive showing by Pakistan s newcomer, Rovman Powell failed to make any impact on his T20 international debut for the West Indies. An all-rounder in the mould of fellow-Jamaican Andre Russell, who is now serving a one-year suspension from the game, Powell was trapped leg-before by medium-pacer Hasan Ali in the midst of the batting slide that effectively killed off any chance of the home side being competitive. There is no letting up from here,” was Sarfraz Ahmed s definitive statement after the win that makes him just the third captain to commence his tenure at the helm in T20 internationals with five consecutive wins after compatriot Misbah-ul-Haq and Sri Lanka s Kumar Sangakkara.