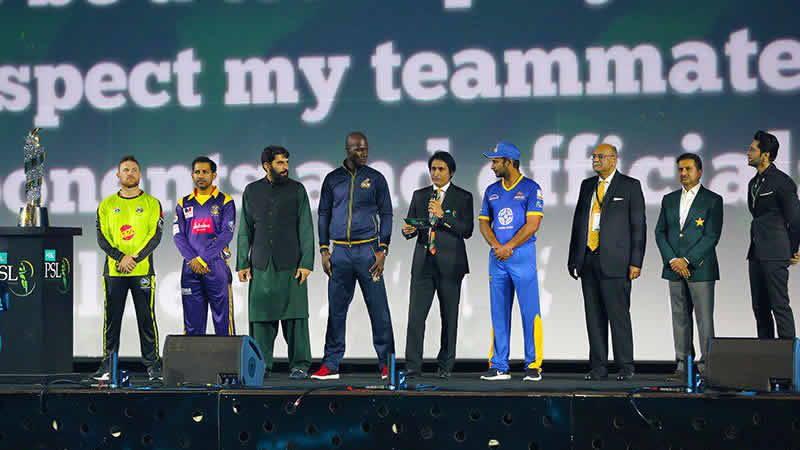 The second edition of the Pakistan Super League (PSL) kicked off with a vibrant and colourful ceremony (dancing and light show) at the Dubai International Stadium here on Thursday night. Former Pakistan captain Ramiz Raja, who is also PSL ambassador, read the pledge ‘to play clean and fair’, which was signed by the captains of every franchise.

Pakistan Cricket Board (PCB) chief Shaharyar Khan opened the PSL, describing the glitzy Twenty20 event as key to paving the way for his country’s return to hosting international series. The majestic opening ceremony featured performances from Pakistan pop singers Ali Zafar and Shahzad Roy and Jamaican reggae singer Shaggy. The chief guest on the occasion was His Excellency Shiekh Nahyan Bin Mubarak Al Nahyan who heads the UAE Ministry of Culture, Youth and Social Development. His Excellency spoke about the deep bond between Pakistan and UAE that was further strengthened by the sport of cricket. He wished the tournament participants success. The 27-day tournament will feature the same five franchises who took part in the opening edition, as Islamabad United started their title defense against Peshawar Zalmi. Unlike last time where all five captains were Pakistani’s, this time only two franchises are being led by the local players. Pakistan Test captain Misbhahul Haq will captain United, whereas newly selected ODI captain Sarfraz Ahmed will lead Quetta Gladiators. Other franchises will be captained by former New Zealand skipper Brendon McCullum (Lahore Qalandars), veteran Sri Lankan Kumar Sangakara (Karachi Kings) and former West Indies two-time World T20 winning captain Darren Sammy (Peshawar Zalmi).

Speaking on the occasion, PSL chief Najam Sethi said it was a great honour to start this second edition of the PSL in the Emirates. “Pakistan nation has proved once again that we can deliver in the most of difficult times. The biggest achievement of this year’s PSL is that we are taking cricket back to Pakistan. We want to show the world that Lahore is the heart of Pakistan, and that Pakistan nation is a peaceful nation. Hopefully after the PSL final, we will also going to bring international cricket back to the country. It’s now your responsibility, the people living in this country, to make sure that this tournament is successful.” He added that he was delighted with the progress that we have made in a span of 12 months. “We are delivering the second edition of the PSL and are confident that the second season is even bigger and better than the last season. We have some of the biggest T20 stars featuring in the tournament and we are all set to witness some enthralling cricket. Pakistanis around the world can be proud of this tournament as we have succeeded in portraying the message that we are cricket lovers and absolutely passionate about the game. We hope to see crowds in big numbers in the two UAE venues Dubai and Sharjah. The final in Lahore should be the crowning glory for PSL 2017. Come support Pakistan cricket and the PSL as it is a spectacle that you will remember forever.”

Final in Lahore: Pakistan will deploy thousands of police and bullet-proof buses for the final of its Twenty20 franchise league, set to be held in Lahore next month after the rest of the tournament is played in the UAE. The violence-hit country has not hosted a high-profile foreign team since a 2009 gun and bomb attack on the Sri Lankan cricket side that killed eight people and injured nine others, including visiting players. Zimbabwe played a one-day series in 2015 but the likes of Australia, England, India and the West Indies have all stayed away from Pakistan. The first edition of its five-team Twenty20 tournament reported a healthy $2.6 million profit last year despite being held entirely in the United Arab Emirates. This year, the finalists are set to fly to Lahore for a limited time to feature in the showpiece event on March 5 in a sobering nod to the delicate security situation in the country.

PCB chairman Shaharyar said that Pakistan cricket stands to gain tremendously from the PSL since chief selector Inzamamul Haq and head coach Mickey Arthur would get a good look at the upcoming talent for the future Pakistan sides. “In the first PSL edition too, we got some fine youngsters in Hasan Ali, Mohammad Asghar, Mohammad Nawaz and few others and I am expecting some more exciting young players like Mir Hamza, Noor Wali, Zafar Gohar to make their mark in PSL 2017.” He hoped that PSL final in Lahore would help convince the world about the improved security situation in Pakistan for resumption of international cricket.