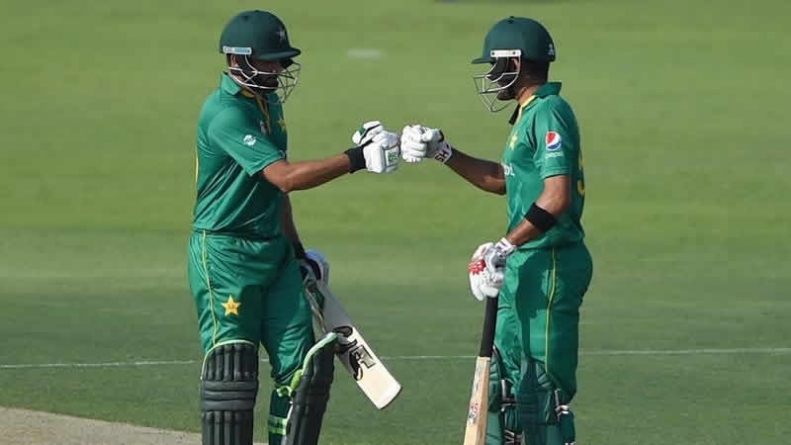 Rising star Babar Azam hit his third successive hundred to anchor Pakistan s 3-0 clean-sweep of the West Indies with a comfortable 136-run win in the third and final one-dayer on Wednesday.

Azam smashed a 106-ball 117 while skipper Azah Ali returned to form with a 109-ball 101 as Pakistan compiled 308-6 before restricting West Indies to 172 in 44 overs on a flat Sheikh Zayed Stadium pitch.

It was another imperious show by Pakistan who won the first two matches by 111 and 59 runs respectively — both in Sharjah. The rout also followed Pakistan s 3-0 whitewash in the preceding Twenty20 series. The two sides will go on to contest a three-match Test series starting in Dubai from October 13. The 3-0 ODI whitewash also lifted Pakistan to number eight in the one-day rankings, displacing their opponents to nine. Azam, 21, became the eighth batsmen to make three hundreds in successive one-day internationals and he was again sublime in achieving the milestone. He also set a new record for most runs in a three-match one-day series with 360, beating the previous highest of 342 by South Africa s Quinton de Kock who set it at home in 2013. Three hundreds in a row doesn t come easy,” said Ali.

“Everyone fought like tigers, so it feels great.” A disappointed West Indian captain Jason Holder called for improvement. We haven t been up to scratch in this series,” said Holder. “We just really need to work on all aspects of the game.” West Indies again lacked aggression and big partnerships in their innings, with Denesh Ramdin top scoring with 37 and Holder making 26. They also lost their last five wickets for just 13 runs with left-arm spinner Mohammad Nawaz (3-40) and paceman Wahab Riaz taking 2-28. Riaz also reached 100 one-day wickets in his 75th match. Kraig Brathwaite (32) and Evin Lewis (22) had given the West Indies a solid 45-run start but wickets tubmled at regular intervals, with Darren Bravo (17), Marlon Samuels (13) and Kieron Pollard (11) failing to shine.

Earlier Azam led Pakistan s batting, setting his team up for a big total with Ali. Azam was finally bowled by Pollard in the 46th over after hitting eight boundaries and a six in another dominating exhibition of batting. Ali, who failed in the first two games with a first-ball duck and nine, hit eight boundaries and a six. He and fellow opener Sharjeel Khan (38) put Pakistan on track for a big total with an 85-run start in 14.1 overs Left-arm spinner Sulieman Benn gave the West Indies their first breakthrough, in his second over, when Sharjeel holed out at long-on after hitting five boundaries off 41 balls. Ali and Azam added 147 for the second wicket before Ali was bowled by Holder in the 39th over.

Sarfraz Ahmed made 24 not out as Pakistan managed 96 runs in the last 15 overs. Azam is only the third batsmen from Pakistan and eighth in the world to notch three hundreds in as many matches. Sri Lanka s Kumar Sangakkara holds the record with four centuries in as many games. Pakistan s Zaheer Abbass and Saeed Anwar, South Africa s Herschelle Gibbs, AB de Villiers and de Kock, and New Zealand s Ross Taylor are others to achieve the milestone. West Indies play a day-night side game with a pink ball in Sharjah from Friday as a rehearsal for the first Test in Duabi, also a day-night match starting from October 13.