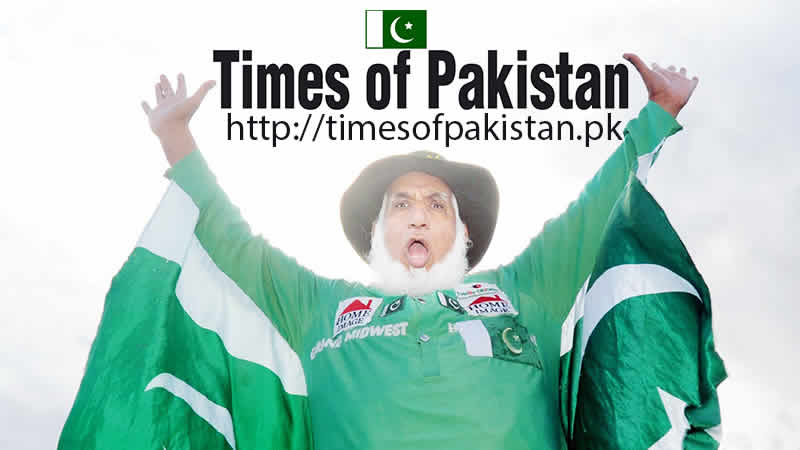 Chacha Cricket has a marvellous style of conversing and he is really persuasive in whatever he says. Some of his words are absolutely memorable and after interviewing him at the Fashion Central Media Group Head Office in Lahore ,we have come to the conclusion that he has a magnetic presence endowed with the capacity to provide spirited enjoyment by displaying animation ,vigor and liveliness around the cricket stadiums.

Chacha Cricket ,named Chaudry Abdul Jalil grew up in the city of Sialkot ,the son of humble parents.Right through his years of growing up he had an immense liking for the game of cricket.Parallel to pursuing his studies ,he was associated with a cricket club in Sialkot and fully enjoyed participating in cricket contests at the club level.

This love for cricket lured him to test matches and he remembers the first one that he watched in the year 1969 when Pakistan and England were up against each other . The legendary Saeed Ahmed was Captain of Pakistan and the world renowned Colin Cowdrey ,Captain of the English side. As luck  would have it the love of cricket became a passion and he pursued the activities of the Pakistan Team at every step till a time came when he was working in Sharjah and the force of destiny took him to the match in Sharjah where Pakistan won because of a great six hit by javed Miandad on the last ball to enable Pakistan to gain victory over their rivals,India. This brought so much joy to Chacha Cricket that he personally funded and distributed 220 kilos of sweets and from thereon he laid the foundations of becoming Chacha Cricket of Pakistan. Last week he visited us at Fashion Central Media Group Head Office in Lahore and agreed to an exclusive interview for one of its online publications timesofpakistan.pk. 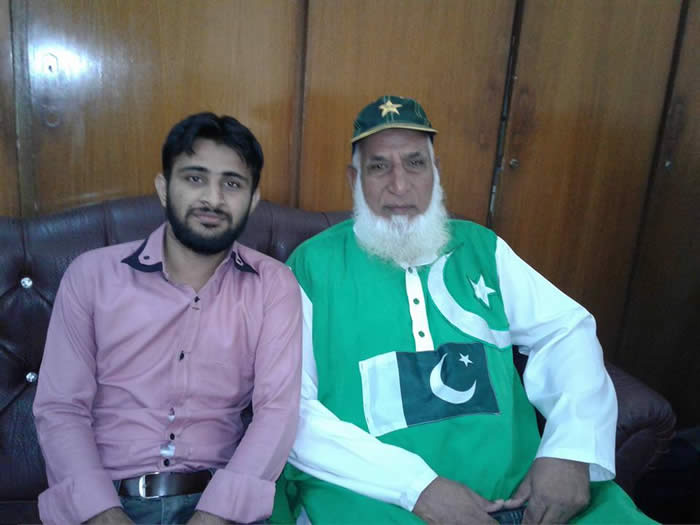 Q1.Take us through your association with Cricket.

A. In my earlier years I have played cricket at the club level and therefore have acquired an understanding and love for the game. The search for bread and butter took me to Sharjah and through dedication and hard work I made a good living there. It was in Sharjah that I went to watch the cricket match between India and Pakistan.And it was here that Pakistan was fortunate to win the match after a momentus six by Javed Miandad on the last ball of the innings giving Pakistan a historic and memorable win. During the match I was successful in motivating the team from the stands by yelling intensly and backing this up by dances and jumps and cheers that made the occasion into a festival and jelled the Pakistani crowd into a single unit. From thereon my role as an effective cheer leader commenced and I began to be recognised as the white bearded force from Pakistan.

Q2.Eversince becoming a cheer leader,what countries have you travelled to

A.I have been to India seven times  and Sharjah regularly since 1989.

Q3.Did you make an impression in India

A. First of all let me say that I was successful in making a big impression in India.It was in india that I managed to fly and display the Pakistani Flag without any hindrance and did this not only in the stands but also flew the flag while moving from the pitch to the pavilion.In this connection I wish to narrate that carrying of poles inside the cricket stadium are not allowed in India and I was the only one who succeeded in obtaining  special permission from the Delhi Chief of Police for carrying a pole inside the Stadium.In this regard let me also share that I have watched 550 international matches. 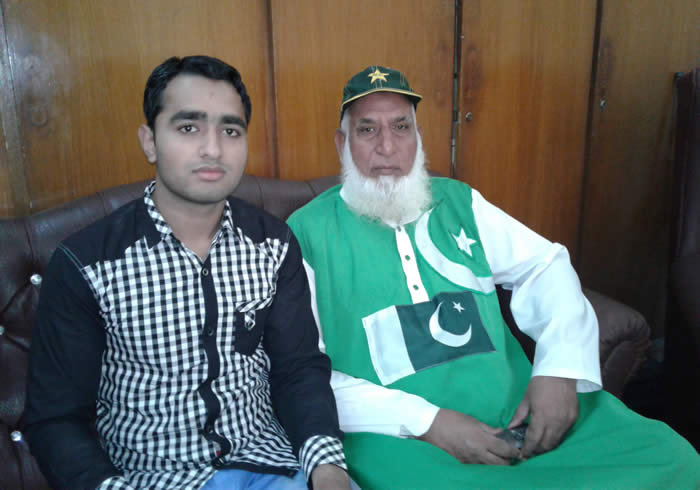 Q4.You have attained a celebrity status in the cricketing world and are admired by millions

A.I consider myself extremely fortunate for having won the admiration of all starata of society. I have been cheered by four year olds who shout slogans like Pakistan Zindabad ,when they see me. I have the honor of being saluted by the Army Chief ,General Mosharraf on the cricket ground.Once when Nawaz Sharif saw me at the Lahore Gymkhana cricket ground in 1999 ,he came over to chat with me. The love and affection I receive keeps me charged up and gives me strength whereby nothing can disturb my peace of mind and love for my country.

A.Oh yes I get so many invitations from such people. They pursue me and show immense love and hospitality,but very soon during the course of interaction ,their designs are exposed.And do you know what I tell them.Please listen to me and give up these immoral pursuits as they will destroy you in the long run. Luckily for me ,they agree immediately and promise not to do it again.

Q6.Have you been part of other national happenings ,besides cricket matches.

A.Yes indeed ,i led a rally on the 23rd of May 1998 when Pakistan acheived the accomplishment of a successful nuclear blast. That occasion was a historic one for the country and helped us to become a nuclear power. 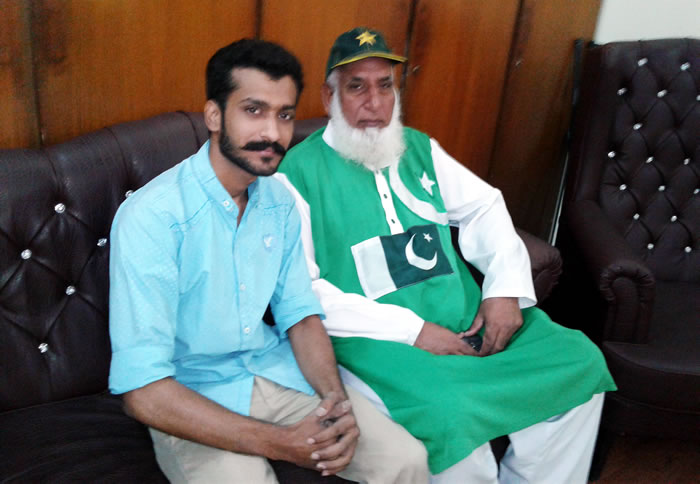 Q7.Share with us some details of your family life

A.Frankly I was not a family man but under family compulsions ,I got married.And the irony is that my wife is the only one who does not call me Chacha Cricket. She adresses me as ‘BAO Ji”which is out of respect and reverence. I have a son who has also played cricket and has participated in cricket contests in Sialkot where Shoaib Malik, was his team mate.

Q8.Do you have other interests

A.Yes i love study of Pakistan History and Islamic History.

Q9.Share with us some of your famous quotes

A.Oh ,these are many and some are
Cricket for joy,not for tension
Cricket for love not for fight
Cricket is Sweet ,not heat. 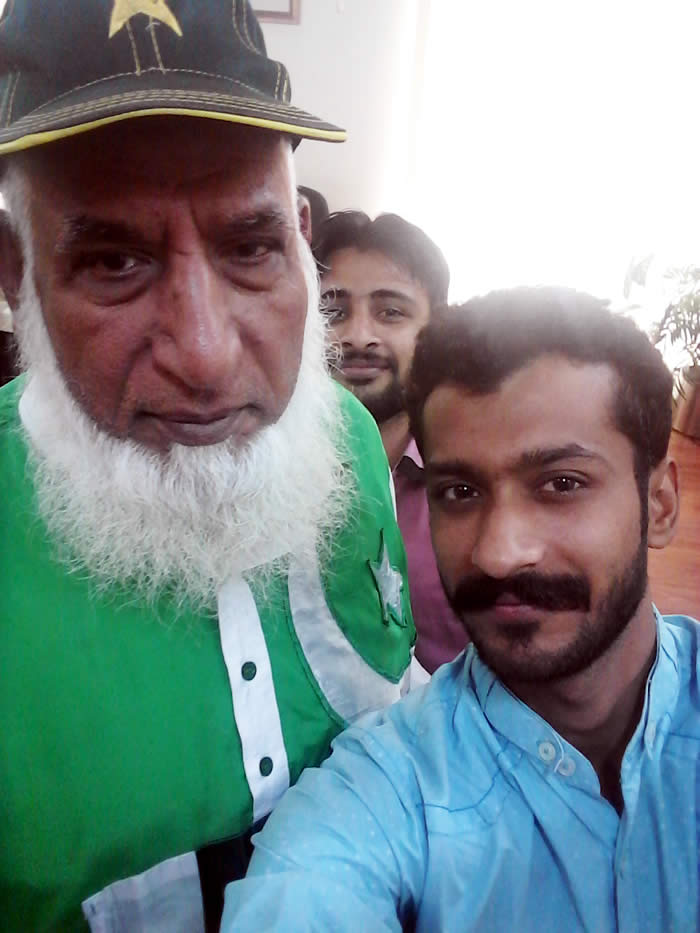 Q10.Will you be travelling to England to buck up the Pakistani Team during their England Cricket Tour in July 2016

A.Yes I plan to go and match wits with the Barmy Army who are official supporters of the English Cricket Team. Already members of the Barmy Army are friends with me and I have received gifts from them in the shape of their uniform.Anyway my green shirt and the Pakistani Flag is my symbol and I will make sure that it stands out in the stands of cricket stadiums all across England.

Q11. Any message for the youth of Pakistan

A.The message is simple
Be a good Insaan
Be a good Pakistani
Khusian Deyn

Kashmir Unrest: Death toll rises to over 40 in six days of clashes

Kashmir Unrest: Death toll rises to over 40 in six days of clashes