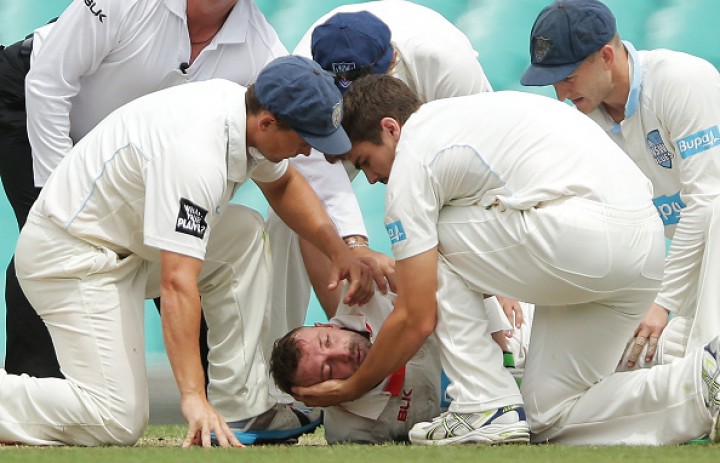 Jasper Vinall was a village cricket player from England. As far as the history of cricket goes, Vinall was the first players who died due to an injury during the game. On 28 August 1624 a cricket match was being held at the Horsted Keynes. Vinall was fielding when one of the batsmen Edward Tye, in order to avoid being caught swung the bat a second time but instead of hitting the ball, the bat struck Vinall’s forehead. He died thirteen days later. Interestingly, both Edward Tye and Jasper Vinall were players from another village, which just proves that back then cricket wasn’t just a fun game but was also played like a competition.

In number 2 position of 10 fatal accidents in cricket is George Summers, an English cricketer who played domestic matches for Nottinghamshire.  In 1870 there was a matching going on between Nottinghamshire and Marylebone Cricket Club at the Lord’s. During the match, a fast bowler named John Platts delivered a ball that struck Summers right on his head. He collapsed and was immediately carried off the field. He recovered and was sent back home. But four days later, Summers’ health began to fail and he suddenly died. The Marylebone Cricket Club paid for his gravestone. And direct result of Summers’ death was that efforts were made to improve the pitch of Lord’s which at the time was in horrible condition.

Andrew Ducat was a fantastic English cricketer and footballer. He was part of an elite group that represented the country in both the sports. He was an excellent batsman who had made 52 centuries. In 1919 he played 306 not out against Oxford University. In 1920, Ducat was named as one of the Wisden Cricketers of the Year. In his cricket career Ducat has suffered a lot of injuries that caused him to miss out on a number of matches. In 1942, Ducat was playing in a wartime cricket match at Lord’s when suddenly due to a fatal heart attack, he expired.

In number 4 position of 10 fatal accidents in cricket is Abdul Aziz, a Pakistani cricketer who played as right hands batsman and was also a wicket keeper. Besides being a cricketer, Aziz studied at the S. M. College and worked for the Pakistan State Bank. He played for Karachi and had appeared in 8 first-class matches. In 1959, during the Quaid-e-Azam final, a slow off break delivered by Dildwar Awan struck him over his heart. He appeared to recover but when preparing to play the second ball, Aziz suddenly collapsed and never gained consciousness. He died while going to the hospital. Doctors later said, the hit over his chest had activated a dormant undiagnosed heart condition.

Wilfred Norris Wilf Slack was an English cricketer who played county cricket for Middlesex (between 1977 and 1988) and Windward Islands (between 1981 and 1983). He was also part of the national team as left-handed opening batsman and had played in two One Day Internationals and three Test matches. During the 1988 English cricket season, Slack had been suffering from a mysterious illness that caused him sudden blackouts. One moment when was playing fine and the next moment he was on the ground unconsciousness. Doctors could not find out anything wrong with him. Then one day while batting in the Republic of the Gambia, Slack blacked out and died of a heart attack.

In number 6 position of 10 fatal accidents in cricket is Ian Folley, an English cricketer who played for Lancashire (between 1982–1990) and Derbyshire in 1991. He began his career at the Lancashire as a right-hand batsman, but after encouragement from Coach Jack Bond, Folley began bowling. As a left-arm seamer and spinner, in the next two seasons, he took 129 wickets. Following an injury to his left arm, Folley left cricket. In 1991, he tried coming back to playing cricket but ended up performing miserably. Two years later, he got injured in the eye while playing cricket and was taken to the hospital. The hospital’s negligence caused Folley a heart attack and he died.

Raman Lamba was an Indian cricketer who played for Delhi (between 1980-1998), North Zone (1980-1991), Ireland (1990) and Abahani (between 1992-1998). In unofficial One Day International matches he sometimes represented Ireland.  He was a right-handed batsmen and a right-arm medium bowler. In his entire career he played in 87 matches where he scored 22 centuries. His career highlight as a batsman was when in 1994-95 in a match against Himachal Pradesh, Lamba scored 312. Then in 1998, while fielding in the Bangladesh’s league cricket, he was hit on the temple by a ball that caused internal haemorrhage and he slipped into coma. Soon after Lamba died.

In number 8 position of 10 fatal accidents in cricket is Wasim Hasan Raja, a Pakistani cricketer. When he was studying in the Government College, Lahore, Raja became the captain of the Pakistan Under-19 side and years alter he also coached the team. Between 1973 to 1985 he played in 54 ODIs and 57 Tests for the Pakistani national cricket team. Between 2002 and 2004, Raja referred 15 Tests and 34 ODIs under the International Cricket Council. In 2006, while playing for the Surrey over-50s side in, England, Raja suffered a heart attack that caused his eventual death.

Darryn Randall was a South African first-class cricketer. While studying at Stirling Primary and Selborne College in East London, Randall represented various provincial youth teams. He even coached a popular cricket academy at Stirling Primary School. He was 32-yers-old when during a Premier League match between Fort Hare University and Old Selbornians, Randall attempting to pull a short delivery and got struck on the side of his head. He was immediately rushed to the hospital but died en route.

In number 10 position of 10 fatal accidents in cricket is Phillip Joel Hughes, an Australian cricketer who has played for a number of teams throughout his long career.  He was a left-handed opening batsman who holds a number of test match records including Australia’s youngest Test centurion and youngest cricketer in history of the game to score centuries in both innings of a Test match. In 2014, during a match at the Sydney Cricket Ground he was hit in the neck by a bouncer. In a very rare accident, Hughes never regained consciousness and died.