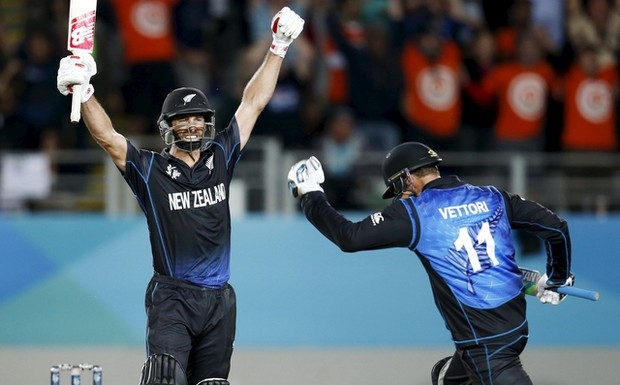 South Africa-born Grant Elliott’s brilliant 84 not out, capped with a stunning six off the penultimate ball, saw New Zealand to a four-wicket win over the Proteas in a cliffhanger World Cup semi-final at Auckland’s Eden Park on Tuesday.

Elliott’s winning six, off injured South Africa fast bowler Dale Steyn, took New Zealand into the World Cup final for the first time and they will play the winner of Thursday’s second semi, between Australia and India in Sydney, in Sunday’s showpiece match in Melbourne. New Zealand faced a revised target of 298 under the Duckworth/Lewis method after South Africa made 281 for five in 43 overs, which included a near two-hour rain stoppage. Black Caps skipper Brendon McCullum made a typically quickfire 59 off 26 balls at the head of the innings. Then came a valuable 103-run partnership between Elliott and Corey Anderson and New Zealand appeared to have the game in hand with six overs to go. But Morne Morkel regained the initiative for South Africa by taking a wicket and conceding only one run in the 38th over and by the start of the 43rd, and final, over New Zealand required 12 to win.

They started with a bye, a single, a four to Daniel Vettori, another bye and then Johannesburg-born Elliott, who turned 36 last weekend, smacked Steyn high into the stands as New Zealand, after losing all six of their previous World Cup semi-finals, completed a thrilling win. South Africa, struggling to throw off their unwanted “choker” tag, have now failed to win all four World Cup semi-finals they have contested. As McCullum flung his bat at the start of New Zealand’s run chase, South Africa captain AB de Villiers was forced to take three of his frontline bowlers out of the attack. Vernon Philander, replacing Kyle Abbott in the side, gave up 14 runs to McCullum with his first over and was immediately replaced by Morkel. Morkel also lasted one over that cost 14 runs but came back from the other end after Steyn was spelled when McCullum hit two sixes and three fours off his third over.