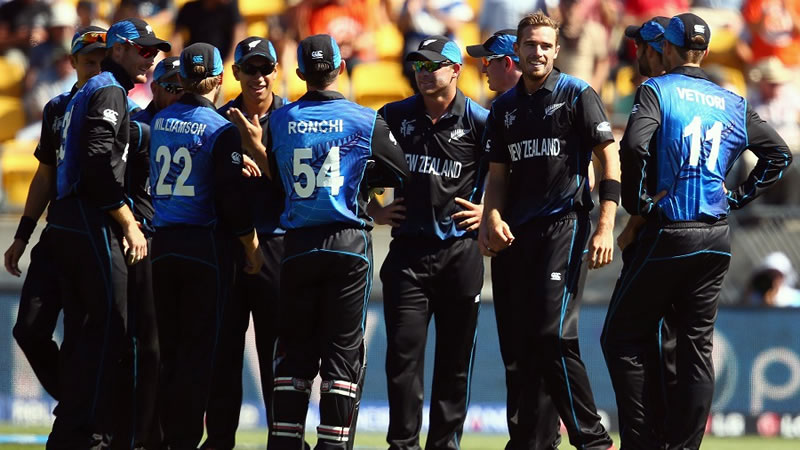 Tim Southee produced one of the great displays of ODI bowling and Brendon McCullum hammered a World Cup record 18-ball fifty as New Zealand produced a display of scarcely believable dominance in Wellington. Southee’s figures of 7 for 33 where the third best in a World Cup and only the third time a New Zealand bowler had taken a five-wicket haul in the tournament.

England subsided to 123 in 33.2 overs after deciding to bat first – their out-of-form captain Eoin Morgan limping to 17 off 41 balls – and lost their last seven wickets for 19 in eight overs as they had no answer to Southee and a suffocating fielding performance. “It’s a bit of a blur at the moment,” a rather shocked Southee said at the end of the innings which came so soon that New Zealand had time to bat before the interval. As if to mock England, McCullum then surged a record fifty, breaking his own mark, and the third-fastest in all ODIs one of the most embarrassing days of England’s one-day history and one of New Zealand’s most famous. McCullum crunched seven sixes of varying ferocity; Stuart Broad was taken for 18 off one over while Steven Finn was brutally dispatched for 49 off two including four consecutive sixes. If he had not been bowled by a Chris Woakes full toss, New Zealand would have won before the break, although the fact they could not stay on for another 12 runs was another example of cricket’s inflexibility.

Sir Richard Hadlee and Shane Bond were the two New Zealand bowlers to bag five-wicket hauls in the World Cup before this. Southee produced a spell that would have done either proud. Much will be made of England’s limp effort, but it was one of the occasions when the mastery of the bowling has to be focal point. Southee set the tone by striking twice in his opening spell, but swing with the new ball is one thing. It was his second burst, between overs 27 and 33, that elevated his spell to greatness as he continued to hoop the ball away from England’s right handers. Two of his wickets came from late-swinging yorkers while delightful leg-cutters accounted for Ian Bell and Chris Woakes. It took Southee a couple of overs to find his range and he struck in the first delivery of his third over when Bell played inside the line of one which nipped away to take the off stump. This was followed by a well-planned set-up of Moeen Ali – and one many a fast bowler are now following – when a bouncer was followed two balls later by a yorker speared under his bat.

His new-ball partner, Trent Boult, with who he has formed a devastating combination over the last 18 months, was all over Gary Ballance as the left hander limped through his innings. He survived a review for lbw on 1 and would then have been gone for 5 if New Zealand had not used up their DRS option. A painful 26-ball stay ended with a toe-end to cover against the worst ball Boult produced. Morgan entered on the back of four ducks in five innings and looked bereft of form, but he and Joe Root began something of a recovery operation without ever convincing. Key to New Zealand never losing control during this period was their outstanding fielding, led by Brendon McCullum and Kane Williamson, which must have left England’s batsmen feeling as though they were playing against 13 men. McCullum was at is most aggressive in the field, starting the innings with four slips and regularly keeping three or four catchers in position even when well outside the initial 10-over Powerplay. He was superbly supported by the accuracy of his bowlers as neither Adam Milne or Daniel Vettori allowed the pressure to loosen. Vettori was regularly switched ends and bowled with delightful control, using subtle changes of pace on a pitch offering little spin. 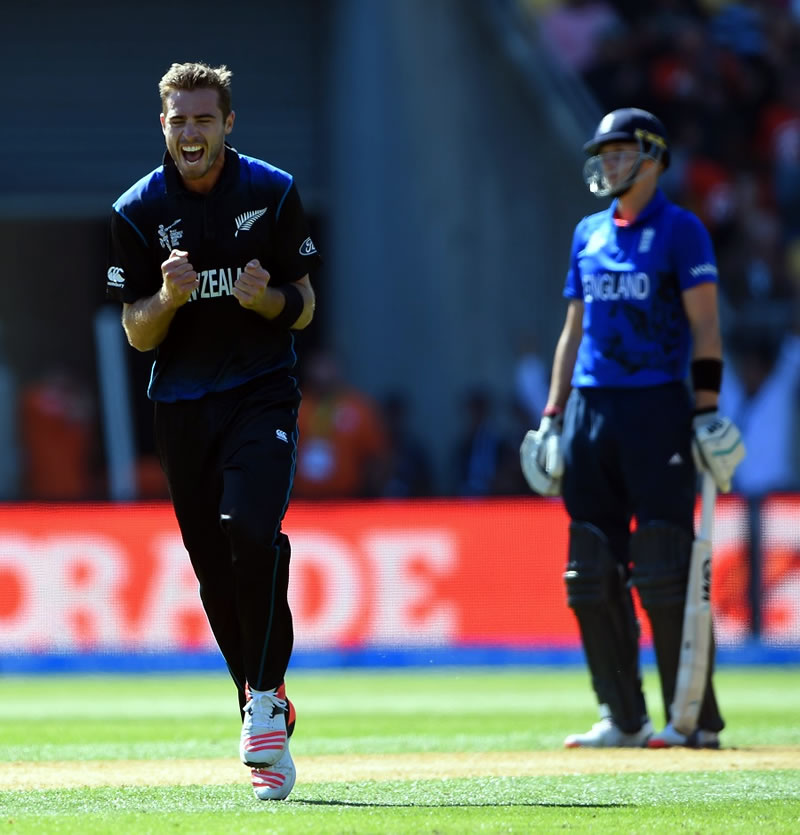 He ended England’s small fightback when Morgan aimed to loft him down the ground with a shot that was neither placed or hit firmly enough to clear the rope, but it still required a fantastic running catch by Milne coming round from long-on. That was the cue for Southee. McCullum, proactive as ever, recalled him to the attack straight away and it took just two balls for him to strike Taylor’s off stump with a late-swinging yorker. His next over brought two more; Jos Buttler edging an outswinger and then Woakes was beaten by another unplayable leg-cutter. Watching it all unfold, with shock in his eyes, was Root. He desperately needed one of the bowlers to stay with him to try and haul England to anything respectable but the end was swift. Broad was never keen to get into line and looped a leading edge into the off side to give Southee his sixth and the record-breaking seventh came when Finn flashed to slip. Root, stranded at the non-striker’s end, threw his head skywards.

A shell-shocked England emerged into the field with nothing left to give. James Anderson’s first ball was a wide and things did not improve. McCullum upper cut his first delivery from Broad over third man – New Zealand did not need to make further statements, but the captain was not of that frame of mind. The fifty was brought up with the first of the four sixes in a row off Finn, which also struck a sponsor’s car, and McCullum kept launching him with fearsome power over the off side. Staggeringly, thoughts briefly turned to whether he could manufacture enough of the strike to challenge the fastest hundred – AB de Villiers’ 31-ball against West Indies – but that would have been one record too many on an extraordinary day.