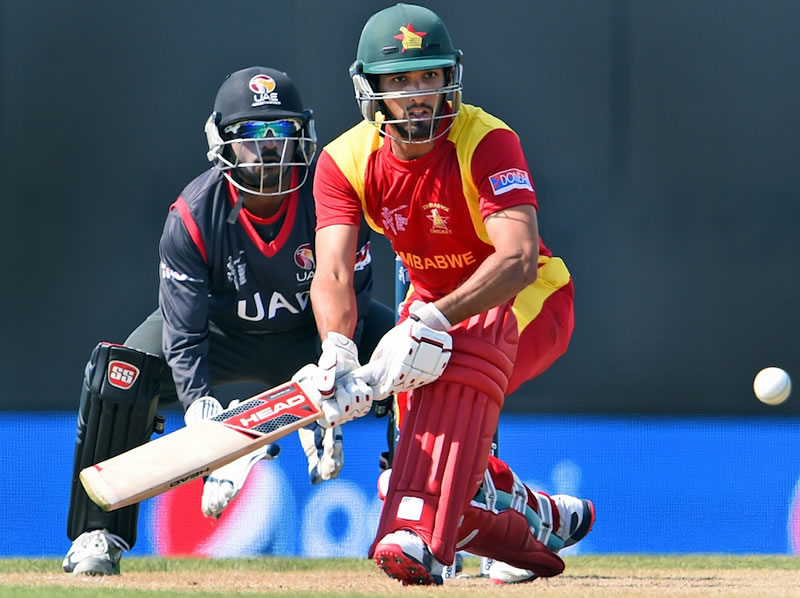 Cricket part-timers the United Arab Emirates made a bold return to the World Cup after almost 20 years Thursday, fully stretching Zimbabwe before losing by four wickets in a tight-finishing Pool B match.

Shaiman Anwar made 67 and 43-year-old veteran Khurram Khan 45 as the UAE scored 285-7 after being sent in to bat. After slipping to 167-5, Zimbabwe relied on Sean Williams’ unbeaten 76 to win with 12 balls to spare.

Off-spinner Mohammad Tauqir, who became the World Cup’s oldest captain at 43 and who works fulltime as an airline purser, took 2-51 as the UAE staunchly defended its total before Williams struck three consecutive boundaries for the winning runs. The UAE last played at a World Cup in 1996, winning one game, and its players are mostly expatriates who have to work fulltime jobs while pursuing their cricket careers. The team finished second to Scotland at the World Cup qualifying tournament in New Zealand in October and came into Thursday’s match confident of being competitive against teams such as Zimbabwe, which revived its campaign after losing to South Africa by 62 runs in its opening match. After reaching a competitive total — its highest ever in a one-day international — the UAE leaked early runs, then exerted some pressure on Zimbabwe before left-handers Williams and Craig Ervine put on 83 for the sixth wicket to energize the run chase. Captain Elton Chigumbura (14 not out) was at the crease when Williams struck three hefty blows to secure the win in the 48th over. “I was disappointed about the fielding,” Chigumbura said. “But, other than that, I thought the guys played well with the bat.

“The good thing about our team is that we have eight batters. Obviously we lost six wickets but we still had two batters sitting out there. There was no pressure but just to try and get over the line was the most important thing to do.” The UAE coped well when they found themselves sent in to bat after losing the toss. Opener Amjad Ali was out for 7 with the total 26 but the remainder of the top and middle order was productive. Andri Berenger made 22, Krishna Chandran 34, Khan 45 and Swapnil Patel 32 before Anwar dashed 67 runs from 50 balls with nine fours and a six. Amjad Javed (25) and Mohammad Naveed (23) added an unbroken partnership of 53 for the eighth wicket which closed out the innings effectively.
Sikandar Raza gave the Zimbabwe reply early momentum, striking 46 from 44 balls, and Regis Chakabva made a patient 35 before stepping on his wicket attempting a pull shot from Tauqir. Zimbabwe was under extreme pressure as it slipped to 167-5 before Williams and Ervine combined.

The pair put on 45 during the batting powerplay to make Zimbabwe’s chase a little more comfortable. Zimbabwe still needed 34 from 34 balls and 25 from 24 with four wickets standing but Williams and Chigumbura showed experience and composure. The United Arab Emirates still made a strong declaration that it won’t be overwhelmed at this tournament. “We played some good cricket but we were expecting a different result,” Tauqir said. “We knew our limitations but we knew if we scored between 280 and 300 we could restrict them. I thought they batted well, they had some good partnerships — both the left-handers played well and they won the game. “I think overall the bowlers bowled well but that one partnership saw (Zimbabwe) through the game. If one of them had got out I think it would have been a different result.”

Obama: US ‘at War With Those Perverting Islam’