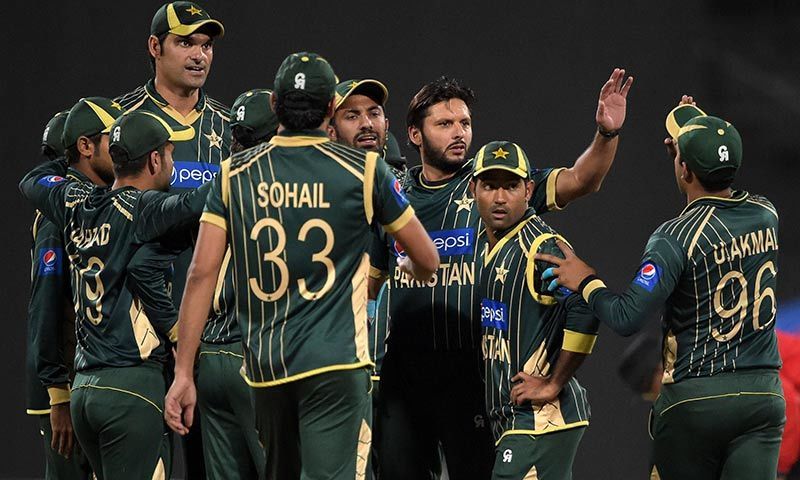 Shahid Afridi has led Pakistan to a massive 147-run win here to help team take a 2-1 lead in the series. This has been a refined performance from Pakistan and the foundation was laid by the batsmen.  Shehzad’s century.

Afridi’s fifty from No. 5, Sarfraz’s late cameo.. it all added up to Pakistan’s third-best total of 364. The chase was never going to be straightforward and once Pakistan took early wickets, it was just a matter of time. Misbah embraces Afridi at the boundary.. wonder what his thoughts would be on Afridi’s captaincy here. Opener Ahmed Shehzad hit a swashbuckling hundred and Shahid Afridi made a fiery 55 and took three wickets to lead Pakistan to a crushing 147-run win over New Zealand in the third one-dayer in Sharjah on Sunday. Shehzad’s 120-ball 113 created the foundation of Pakistan’s biggest-ever total against New Zealand of 364-7 before they dismissed the Black Caps for 217 in 38.2 overs to go 2-1 up in the five-match series.

Pakistan won the first game by three wickets in Dubai while New Zealand took the second by four wickets, also played in Sharjah. The win was Pakistan’s second biggest win against New Zealand, just behind their 153-run win at Karachi in 2002.

Shehzad’s knock, his sixth one-day hundred, was spiced with a dozen boundaries and two sixes while Afridi pulverised the bowlers with three sixes and six boundaries off just 25 balls. It proved too much for New Zealand who were jolted right at the start with lanky paceman Mohammad Irfan (2-26) dismissing Anton Devcich (nought) and Martin Guptill (12) by the sixth over. Captain Kane Williamson hit 46 while Ross Taylor made 31 during a stand of 45 for the third wicket but Afridi (3-37) had Taylor bowled while Haris Sohail dismissed the New Zealand skipper to leave them struggling at 115-4. Sohail also had Jimmy Neesham (two) and Nathan McCullum (15) to finish with 3-45. Luke Ronchi was the last man out, bowled by Afridi for 41. The 23-year-old Shehzad, who has scored hundreds in all three formats this year, built invaluable partnerships after giving Pakistan a brisk start of 63 with Mohammad Hafeez who made a 26-ball 33 with five fours and a six. Shehzad added another 70 for the second wicket with Younis Khan (35) and 77 for the third with Asad Shafiq (23).

His innings helped Pakistan overcome the loss of regular skipper Misbah-ul Haq, who has been ruled out of the series due to a hamstring injury sustained in the second match. Shehzad finally holed out in the 37th over as paceman Matt Henry also removed Shafiq with the very next ball. Stand-in skipper Afridi and Sohail (28-ball 39) ensured Pakistan did not lose sight of a big total with an 89-run stand for the fifth wicket off just 45 balls. Sohail hit five boundaries and a six. Afridi’s whirlwind knock helped Pakistan collect 125 runs in the last ten overs.

Sarfraz Ahmed chipped in with 30 not out off 14 balls. Ironically, New Zealand had scored the previous highest total of 338-4 at this ground against Bangladesh in 1990. Anderson’s ten overs cost 96 runs as the Kiwi bowlers were hit to all corners of the park. Misbah was replaced by Umar Akmal while New Zealand brought in McCullum, Neesham and Guptill. The fourth and fifth matches will be played in Abu Dhabi on Wednesday and Friday.