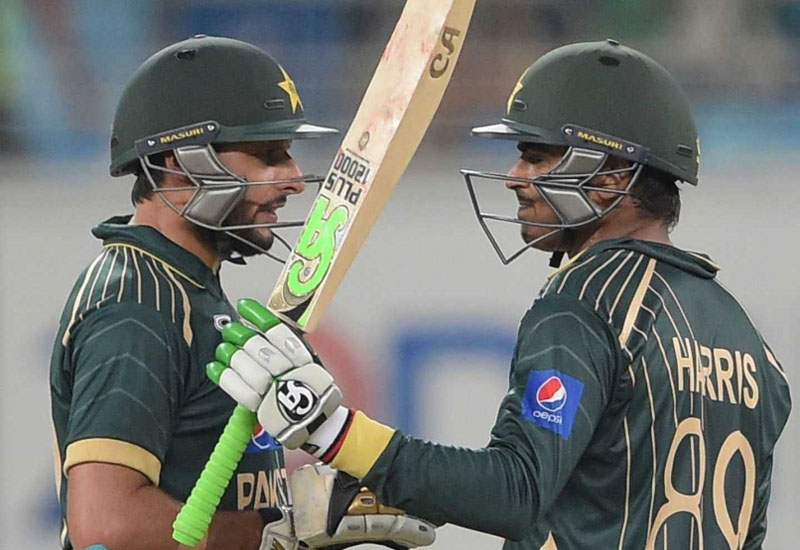 Newcomer Haris Sohail batted with maturity during his maiden one day international half-century to steer Pakistan to a three-wicket win in the first day-night international against New Zealand in Dubai on Monday.

The 25-year-old left-hander scored 85 off 109 balls and added 110 for the seventh wicket with veteran Shahid Afridi (who hit a 51-ball 61) to rescue Pakistan from a precarious 124-6 and into a 1-0 lead in the five-match series. Pakistan, set a daunting 247-run target, were struggling at 40-3 before Sohail added 34 with skipper Misbah-ul Haq (13) and 38 with Sarfraz Ahmed (26) to steady the innings. With just 13 needed at a run-a-ball Afridi was run out but Sohail hit Jimmy Neesham for his fifth boundary to seal the win with three balls to spare. He also hit a six. Afridi hit seven boundaries and a six in his 37th one-day fifty. Earlier Ross Taylor became the sixth batsman, and first from his country, to score three hundreds in consecutive matches to lift New Zealand to 246-7.

Pakistan’s Zaheer Abbas and Saeed Anwar and South Africa’s Herschelle Gibbs, AB de Villiers and Quinton de Kock have also achieved the feat. Pakistan lost wickets at regular intervals with Mohammad Hafeez (six), Asad Shafiq (five), Ahmed Shehzad (28) and Younis Khan (four) trudging back to the pavilion with the score barely passing 50. Paceman Kyle Mills gave New Zealand the breakthrough in the fifth over bowling Hafeez before Daniel Vettori struck twice and Neesham once. Earlier Taylor had held together the New Zealand innings after Mohammad Irfan (3-57) had inflicted serious damage on the top order. Taylor added 58 for the seventh wicket with former captain Vettori (27) in the final overs after steadying the innings during a 44-run sixth wicket stand with Luke Ronchi, who made 23. Irfan had dismissed opener Dean Brownlie (14) and skipper Kane Williamson (10) in his first five-over spell before returning to take Ronchi’s wicket in the 38th over.

Tom Latham was run out for 13 and Neesham was lbw to Afridi for one as New Zealand were left struggling at 111-5. Paceman Wahab Riaz claimed the wickets of opener Anton Devcich (26) and Vettori to finish with 2-51. But Taylor kept one end intact, reaching his 27th one-day fifty with a single. He hit Umar Gul for a six and a four and then took a sharp single to complete his hundred off 133 balls with eight fours and a six.

He hit another boundary off Riaz on the final delivery as New Zealand scored 41 runs in the last five overs. Pakistan included all-rounder Hafeez as a batsman alone after he was suspended over an illegal bowling action but left out hard-hitting Umar Akmal. New Zealand were forced to leave out opener Martin Guptil and all-rounder Corey Anderson due to injuries. The remaining matches will be played in Sharjah (December 12 and 14) and Abu Dhabi (December 17 and 19). -dawn